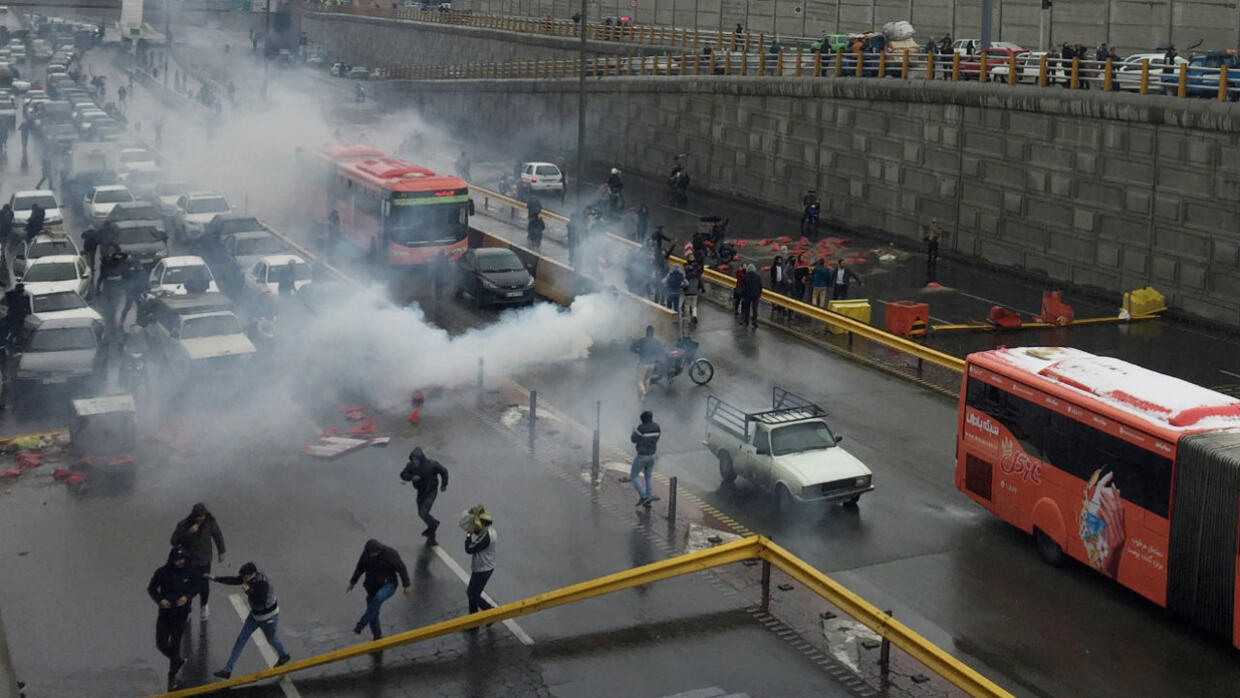 Iran’s powerful Revolutionary Guards warned anti-government protesters on Monday of “decisive” action if unrest over gasoline price hikes do not cease, state media said, in a hint that a harsh security crackdown could be on the cards.

The protests have spread across the Islamic Republic since Friday, turning political with demonstrators demanding that top clerical leaders step down. At least 100 banks and dozens of buildings and cars have been torched, state media reported.

“If necessary we will take decisive and revolutionary action against any continued moves to disturb the people’s peace and security,” the Revolutionary Guards, Iran’s heavily armed main security force, said in a statement carried by state media.

The breadth of the disturbances sparked by announcements of fuel rationing and price rises of at least 50 percent remains unclear as authorities have curbed Internet access to stop the use of social media to organise rallies and disseminate videos.

But it appears to be the worst unrest since late 2017 when protests hit over 80 cities and towns, staged by thousands of young and working-class Iranians fed up with alleged corruption, high unemployment and a widening gap between rich and poor.

The Guards and its affiliated Basij militia quelled that bout of unrest, in which at least 22 people were killed.

Two years on, anger and desperation has resurfaced over the painful economic effect of renewed U.S. sanctions and the government’s failed promises of more jobs and investment.

Some Iranians managed to post social media videos that showed police firing tear gas to disperse protesters. The images could not be verified by Reuters.

Authorities said several people, including members of the security forces and policemen, had been killed and around 1,000 “rioters” arrested, some for using guns and knives.

The Iranian leadership is anxious to end the unrest to avoid giving ammunition to Western, especially U.S., criticism of the Islamic Republic elite as allegedly corrupt and unaccountable.

Fearing that any long spell of disturbances could undermine the legitimacy of the Islamic Republic altogether, Iran’s faction-ridden political elite has displayed a united front.

Some officials and insiders said the establishment would eventually gain from the turmoil by securing a high turnout at parliamentary elections in February, seen as a litmus test for the popularity of the Islamic Republic at home.

“Those 60 million people who will receive cash handouts as a result of this price hike will surely vote because the economy is a key issue for many Iranians,” a senior official told Reuters on condition of anonymity.

“The decision was made because among other reasons, there were concerns that the growing economic discontent, particularly among middle and lower classes, could lead to a low turnout.”

Handouts to the poor, the most consistent core of support for the clerical establishment, will start on Tuesday.

For many Iranians, the challenge to make ends meet became even harder last year when President Donald Trump withdrew the United States from Tehran’s nuclear deal with world powers and reimposed sanctions that had been lifted under the accord.

Frustration has grown over a sharp devaluation of Iran’s rial currency as well as spikes in the prices of bread, rice and other staples since Washington began to apply “maximum pressure” on Iran to make tougher nuclear and security concessions.

Many in oil-producing Iran see cheap gasoline as a fundamental right and the price hike sparked worries about a further squeeze on living costs, despite state assurances that the revenue raised would be put to assisting needy families.