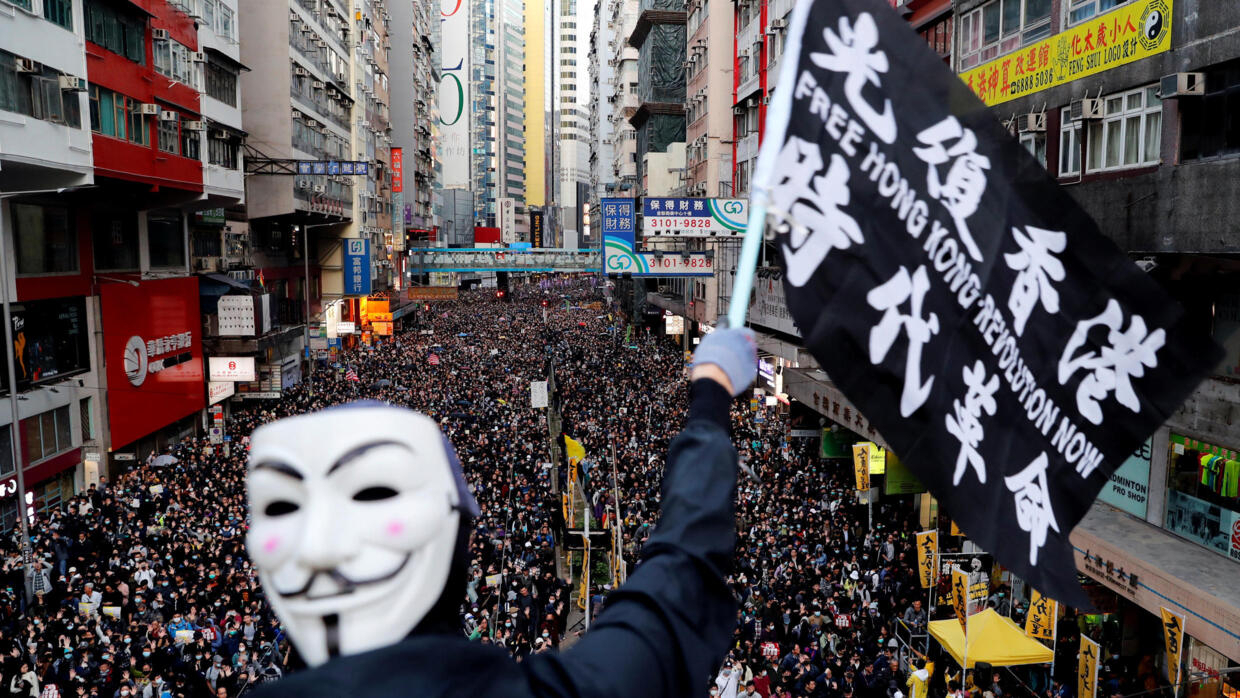 Organisers of a massive pro-democracy march in Hong Kong on Sunday said some 800,000 people took part, the largest turnout in months as the movement marks half a year of protests and unrest.

“We have had 800,000 participants,” Eric Lai, from the Civil Human Rights Front, told reporters on Sunday evening as large crowds still thronged the streets.

Hong Kong’s police, who usually give far lower estimates, had yet to release their figures.

The march comes two weeks after pro-establishment parties got a drubbing in local elections, shattering government claims that a “silent majority” opposed the protests.

But activists say public anger is building once more after chief executive Carrie Lam and Beijing ruled out any further concessions despite the landslide election defeat.

“No matter how we express our views, through peacefully marching, through civilised elections, the government won’t listen,” said a 50-year-old protester, who gave his name only as “Wong” and who was among hundreds arriving early for Sunday’s rally.

“It only follows orders from the Chinese Communist Party,” he added.

The semi-autonomous financial hub has been battered by increasingly violent demonstrations in the starkest challenge the city has presented to Beijing since its 1997 handover from Britain.

Millions have hit the streets in protests fuelled by years of growing fears that authoritarian China is stamping out the city’s liberties.

The last fortnight has seen a marked drop in street battles and protester vandalism after the landslide win by pro-democracy candidates.

Police have taken the unusual step of allowing the Civil Human Rights Front to hold a march through the main island on Sunday — the first time the group has been granted permission since mid-August.

Organisers have called on Lam to meet their demands, which include an independent inquiry into the police’s handling of the protests, an amnesty for those arrested, and fully free elections.

“This is the last chance given by the people to Carrie Lam,” CHRF leader Jimmy Sham said on Friday.

Hong Kong’s protests are largely leaderless and organised online. They were initially sparked by a now-abandoned attempt to allow extraditions to the mainland but have since morphed into a popular revolt against Beijing’s rule.

The CHRF, which advocates non-violence, has been the main umbrella group behind record-breaking rallies earlier in the summer that saw huge crowds regularly march in searing heat.

Large crowds have simply ignored the bans, sparking near-weekly tear gas and petrol bomb clashes that have upended Hong Kong’s reputation for stability and helped tip the city into recession.

Hours before the march was due to kick off, police displayed weapons, including a pistol and knives, they said had been found during overnight raids where eleven people were arrested.

Sunday afternoon’s march will follow a well-worn route on the main island from Victoria Park to the heart of the commercial district.

It comes a day before the city marks the six-month anniversary of the protest movement in which some 6,000 people have been arrested and hundreds injured, including police.

Online forums used to organise the movement’s more radical wing have vowed to target the morning commute on Monday if there is no response from Lam.

Years of huge, peaceful democracy marches have made little headway, leading to increased radicalisation among some Hong Kong protesters and a greater willingness to embrace violent tactics.

But there is little sign Lam is willing to budge, leading to fears the lull in street clashes will be temporary.

Since the local elections the city’s chief executive has remained steadfast in her opposition to further concessions and Beijing has stuck by her even as she languishes with record low approval ratings.

The police force’s reputation has also taken a hammering.

A new poll released on Friday by the Hong Kong Public Opinion Programme, which has tracked public sentiment for years, showed record disapproval for the force with 40 percent of respondents now giving it the lowest mark of zero.

Over the last two days the city’s new police chief Chris Tang has been in Beijing where he met with senior party figures including public security chief Zhao Kezhi who gave his “strongest backing” according to official reports.

Tang, who has continued his predecessor’s policy of rejecting calls for an independent inquiry, said his officers would clamp down on any violence at Sunday’s march.

“If there is arson, petrol bombs or damage to shops, we will take action,” he told reporters in Beijing.