New Zealand’s Prime Minister Jacinda Ardern expressed “unfathomable grief” on Tuesday after a volcanic eruption at a popular tourist island that is thought to have killed 13 people.

There was little hope of finding the missing alive, after overnight aerial reconnaissance flights found no signs of life.

“The focus this morning is on recovery and ensuring police can do that safely,” Ardern told a press conference.

Among those on the island during the cataclysm were tourists from Australia, the United States, Britain, China and Malaysia, as well as their New Zealand guides.

“To those who have lost or are missing family and friends, we share in your unfathomable grief and in your sorrow,” Ardern said.

“Your loved ones stood alongside Kiwis who were hosting you here and we grieve with you.”

Ardern singled out “our Australian family” for sympathy, while her Australian counterpart Scott Morrison said there were fears that three of the five dead were Australian.

“This is a very, very hard day for a lot of Australian families whose loved ones have been caught up in this terrible, terrible tragedy,” he told reporters in Sydney.

A total of 31 people – including 13 Australians – were in hospital with various injuries, some listed as critical with serious burns.

White Island Tours, a trip operator, confirmed that two of its guides were unaccounted for, while Britain’s high commissioner in Wellington said two female citizens were in hospital. 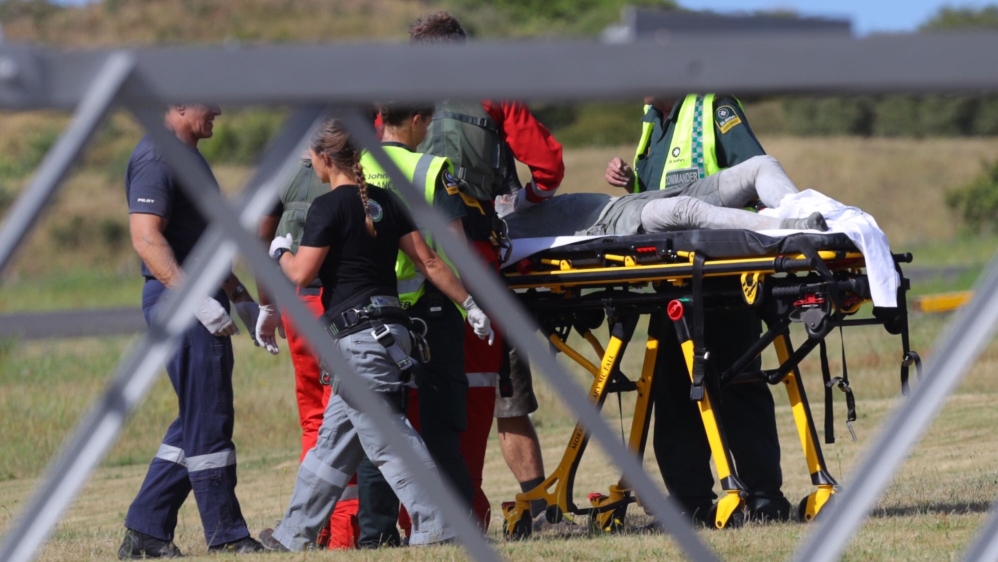 A total of 31 people – including 13 Australians – were in hospital with various injuries, some listed as critical with serious burns [Alan Gibson/New Zealand Herald via AP]

“We will only go to the island when it is safe to do so for our people,” police spokesman Bruce Bird said.

He said a helicopter scoured the area for 45 minutes, checking if anyone was still alive – without success.

The island is about 50km (30 miles) off New Zealand’s North Island in the picturesque Bay of Plenty and attracts more than 17,000 visitors every year.

When the blast occurred, it was being visited by a group of more than 30 people from a Royal Caribbean cruise ship, the Ovation of the Seas, which left Sydney on a 12-day voyage last week.

The threat level at the volcano had been raised in recent days, and questions are already being asked about whether it was safe for tour groups to visit.

Cruise operator Royal Caribbean had sold a day trip to White Island as an “unforgettable” adventure to New Zealand’s most active volcano, one that took visitors so close to the action they could require gas masks and hard hats.

White Island Tours said it “operates through the varying alert levels” but that “passengers should be aware that there is always a risk of eruptive activity regardless of the alert level”.

Scientists said there had been increased activity at the volcano over the past week – but nothing to indicate an eruption was imminent.