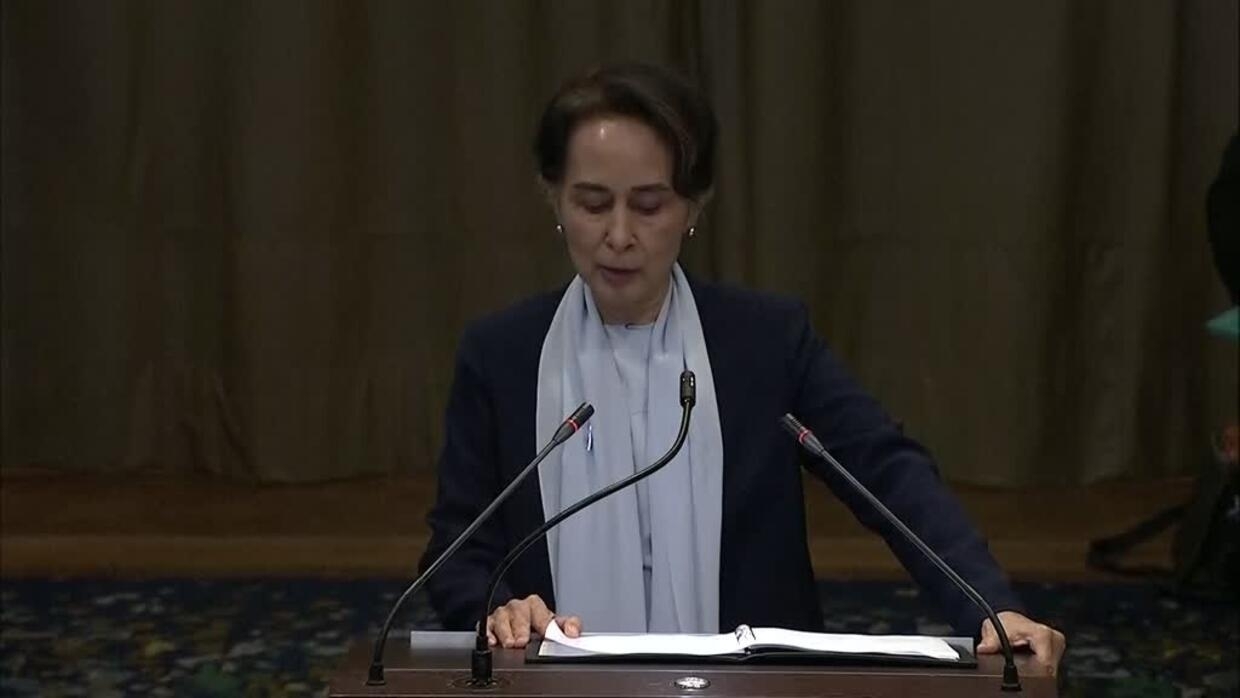 Addressing judges in The Hague, Myanmar’s civilian leader admitted that the army may have used “disproportionate force” but said that did not prove it was trying to wipe out the minority group.

The African state of The Gambia has taken Myanmar to the International Court of Justice (ICJ) over a bloody 2017 military crackdown in which thousands of people were killed and around 740,000 Rohingya fled to neighbouring Bangladesh.

Once hailed internationally for her defiance of Myanmar’s junta, Suu Kyi was this time on the side of the southeast Asian nation’s military when she took the stand.

“Regrettably The Gambia has placed before the court a misleading and incomplete picture of the situation in Rakhine state,” Suu Kyi, wearing traditional Burmese dress and flowers in her hair, told the court.

She argued that the army was responding to an attack by hundreds of Rohingya militants in 2017.

“It cannot be ruled out that disproportionate force was used by members of the defence services in some cases in disregard of international humanitarian law, or that they did not distinguish clearly enough between fighters and civilians,” she said.

But she said that Myanmar was undertaking its own investigations, adding: “Surely under the circumstances genocidal intent cannot be the only hypothesis.”

The Gambia, which is mostly Muslim, accuses Myanmar of breaching the 1948 genocide convention and has asked the court to take emergency measures to stop further violence.

UN investigators last year concluded that Myanmar’s treatment of the Rohingya amounted to genocide while rights groups have detailed a catalogue of alleged abuses.

Suu Kyi however said that the court, set up in 1946 to rule on disputes between member states, had not confirmed genocide in cases of mass expulsions of civilians in the 1990s Balkans war.

Around 250 pro-Myanmar protesters gathered in front of the International Court of Justice, carrying placards with Aung San Suu Kyi’s face reading “We stand with you” and carrying pictures of the leader.

“These allegations against Myanmar and Suu Kyi are rubbish,” said Chomar Oosterhof, 53, a Burmese living in the Netherlands. “We just want our country to prosper and Suu Kyi is the person to do it.”

Meanwhile, a small group of pro-Rohingya supporters were also gathered at the court, shouting: “Aung San Suu Kyi, shame on you!” Another lone protester was holding up a poster of one of Myanmar’s generals, saying “Wanted for Mass Murder.”

The 74-year-old Suu Kyi sat impassively through graphic accounts of mass murder and rape on Tuesday as Gambia set out its case against Myanmar.

Gambian Justice Minister Abubacarr Tambadou, who opened his country’s case, said it would be “extremely disappointing” if Suu Kyi repeated her previous denials of wrongdoing by Myanmar.

He urged the court to tell he to “stop the genocide”.

ICJ judges have only once before ruled that genocide was committed, in the 1995 Srebrenica massacre in Bosnia.

Suu Kyi’s decision to personally lead her country’s case at the court has proved popular at home, where the Rohingya are widely regarded as illegal immigrants.

Flag-waving supporters joined rallies in support of Suu Kyi in several Myanmar cities on Tuesday and rally organisers in Yangon told AFP they had permission from authorities to live stream Wednesday’s ICJ hearing on a big screen outside the City Hall.

Huge billboards of Suu Kyi and three smiling generals have also appeared around the country.

Aung San Suu Kyi was once mentioned in the same breath as Nelson Mandela and Mahatma Gandhi, having won the Nobel in 1991 for her resistance to Myanmar’s brutal junta.

After 15 years under house arrest, she was freed in 2010 and led her party to victory in elections in 2015.

But her defence of the same military that once kept her locked up has since caused international condemnation.

Myanmar meanwhile faces a number of legal challenges over the fate of the Rohingya, including a probe by the International Criminal Court — a separate war crimes tribunal in The Hague — and a lawsuit in Argentina personally mentioning Suu Kyi.