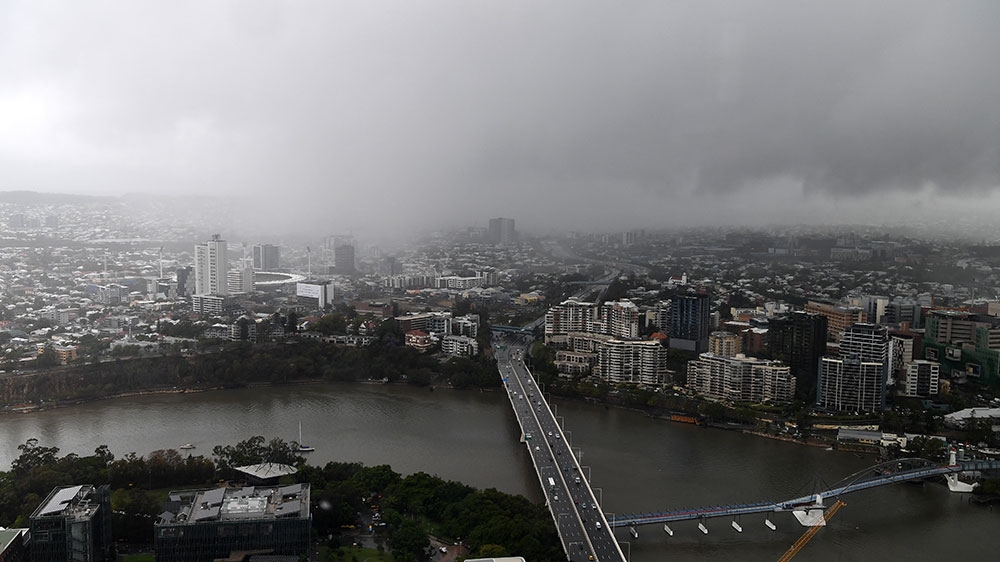 As the bushfires continue to burn across areas of Queensland and New South Wales states, some much needed rain has been working its way along eastern coasts.

Wednesday night, Brisbane picked up more than 100 millimetres of rain, with 130mm falling in East Brisbane, and 112mm of that in just one hour. The average rainfall for Brisbane in December is 116mm for the entire month.

The rain was accompanied by strong winds and about 29,000 homes lost power as the storm hit. Lightning strikes were fast and frequent, with 208,000 reported.

Flash-flooding in some areas of the city took many drivers by surprise, with several calls to the emergency services for help, but no injuries were reported.

Golf-ball sized hail was recorded east of Warwick and some at Applethorpe, before the thunderstorm cell tracked towards Brisbane. Amberley, Archerfield and Brisbane airports recorded wind gusts of between 60 and 70 kilometres per hour.

Knepp said, ”I have not doubt there were stronger wind gusts than that in our area.”

Although rainfall totals of more than 60mm were recorded in parts of the Granite Belt, Southern Downs Regional Council’s Director of Infrastructure Services Seren Mckenzie said the rain missed the region’s dams.

“Storm King Dam at Stanthorpe, unfortunately we’ve had no overnight change in the level there. In Leslie Dam, we’ve only seen a slight increase, not even a week’s worth of water went into the dam. Hopefully there’ll be a little bit more runoff from rain that occurs over Warwick,” said Mckenzie.

The town of Stanthorpe is due to run out of water this month, while supplies in Warwick are expected to last until next year.

There is more rain on the way in the coming days and the BoM has warned any severe thunderstorms could lead to flash flooding, with parts of the Gold Coast, Sunshine Coast and the Southern Downs expecting to be in impacted.

More than two-thirds of Queensland is now officially in drought, with only northern parts of the state and Brisbane drought-free, so any rain is welcome.