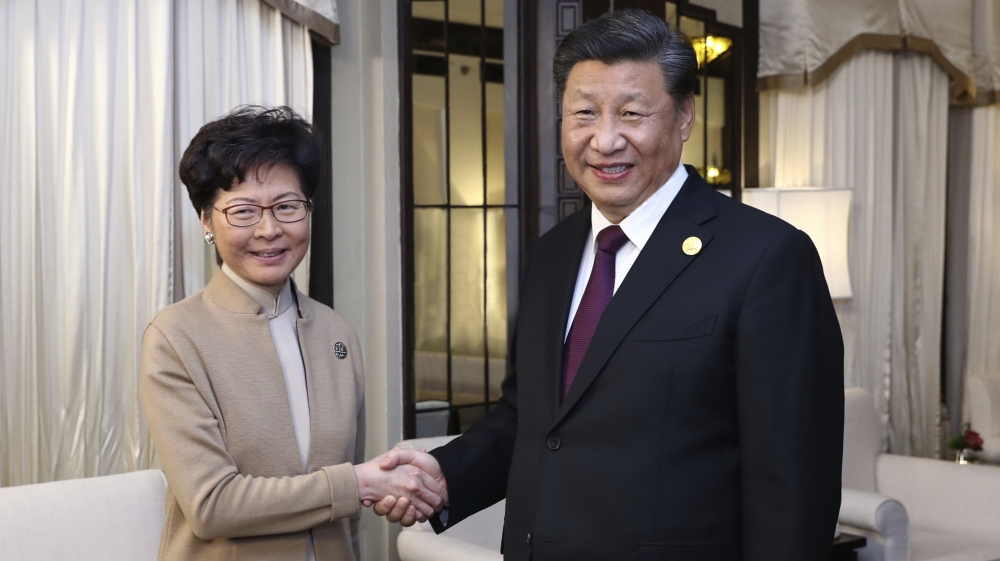 Hong Kong leader Carrie Lam left for Beijing on Saturday for her first visit to the Chinese capital since her government was handed a crushing defeat in local elections last month, prompting speculation about changes to her leadership team.

Lam is due to discuss the political and economic situation in the China-ruled city with Beijing officials during a four-day visit. She will meet Chinese President Xi Jinping on Monday, news reports said.

Hong Kong has been convulsed by daily and often violent protests for the last six months as demonstrations against a now-withdrawn extradition bill broadened into demands for greater democratic freedom.

There have also been calls from opposition politicians, activists and the Hong Kong media for Lam to resign.

Amid all the pressure, Lam has remained unbowed and said that there will no further concessions to the protesters.

Last Saturday, hundreds of thousands of people marched to protest against what is seen as Beijing undermining freedoms guaranteed when the former British colony was handed back to China in 1997.

Many young protesters are also angry at Lam’s government, charging it with failing to address social inequality issues in one of the world’s most expensive cities.

This week Lam said a cabinet reshuffle was not an “immediate task” and she would focus her efforts on restoring law and order to Hong Kong.

Still there are doubts about how long Beijing is willing to back her. Especially after pro-democracy candidates won nearly 90 percent of the seats in district elections last month.

China has condemned the unrest and blamed foreign interference. It denies that it is meddling in Hong Kong’s affairs.

In an editorial this week, the official China Daily newspaper called on Hong Kong’s government to uphold the rule of law.

Separately, police have arrested five teenagers in connection with the murder of a 70-year-old man last month and for rioting, the government said.

The man had been assaulted by someone with bricks and later died in hospital, the government said in a statement.

He was the second person in less than a week to die in protest-linked incidents.

Alex Chow, a 22-year-old university student, died on November 8 from head injuries sustained during a fall in a multi-storey carpark while police and protesters were clashing.

Although the events leading to his fall are unclear and disputed, protesters have blamed police.

The past three weeks have seen a lull in the violence and vandalism after pro-democracy parties won a landslide in local council elections.