Authorities in Australia on Thursday declared a seven-day state of emergency in New South Wales, the second in as as many months, as a record heatwave fanned unprecedented bushfires raging across the region.

Some 100 fires have been burning for weeks in the country’s most populous state. Half are uncontained, including a “mega-blaze” ringing Sydney and covering Australia’s biggest city in a haze of toxic smoke.

NSW Premier Gladys Berejiklian said the state of emergency was due to “catastrophic weather conditions”.

“The biggest concern over the next few days is the unpredictability, with extreme wind conditions, extremely hot temperatures,” Berejiklian told reporters in Sydney.

The country experienced its hottest day on record on Tuesday, with the average temperature across the country reaching 40.9 degrees Celsius (105.6 degrees Fahrenheit). The record is expected to be beaten again as an intensifying heat wave spreads across the east.

A State of Emergency is declared in NSW from today giving Commissioner Fitzsimmons additional powers to deal with the bushfires. Severe weather conditions are forecast for today and will worsen on Saturday. Listen to warnings and be prepared. #NSWfires pic.twitter.com/iIqfFpIQIW

There are 2,000 firefighters battling the blazes with the support of teams from the United States and Canada as well as the Australia Defence Force.

New South Wales Rural Fire Service commissioner Shane Fitzsimmons said five 100-person “strike teams” were on standby to deploy to the most dangerous fires, “given the enormity of some of these fire complexities and the severity of the forecast weather conditions that are expected to unfold throughout today”.

“The worst of the fire weather conditions, the extreme fire danger ratings we are expecting today, are centred around the greater Sydney environment,” he added.

More than 70 fires are also raging across Queensland state to the north of NSW, including one at Peregian, near the coastal tourist hub of Noosa, that forced people to flee their homes Wednesday. Bushfires are also burning in South Australia and Western Australia.

The fires have ravaged at least three million hectares (7.4 million acres) of land across Australia in recent months, with six people killed and more than 800 homes destroyed.

Scientists say the blazes have come earlier and with more intensity than usual due to global warming and a prolonged drought that has left the land parched and many towns running out of water.

The fires have sparked climate protests targeting the conservative government, which has resisted pressure to address the root causes of global warming in order to protect the country’s lucrative coal export industry.

Climate protesters plan to march on Prime Minister Scott Morrison’s official residence in Sydney to demand curbs on greenhouse gas emissions and draw attention to his decision to holiday overseas holiday even as large parts of the country burn. 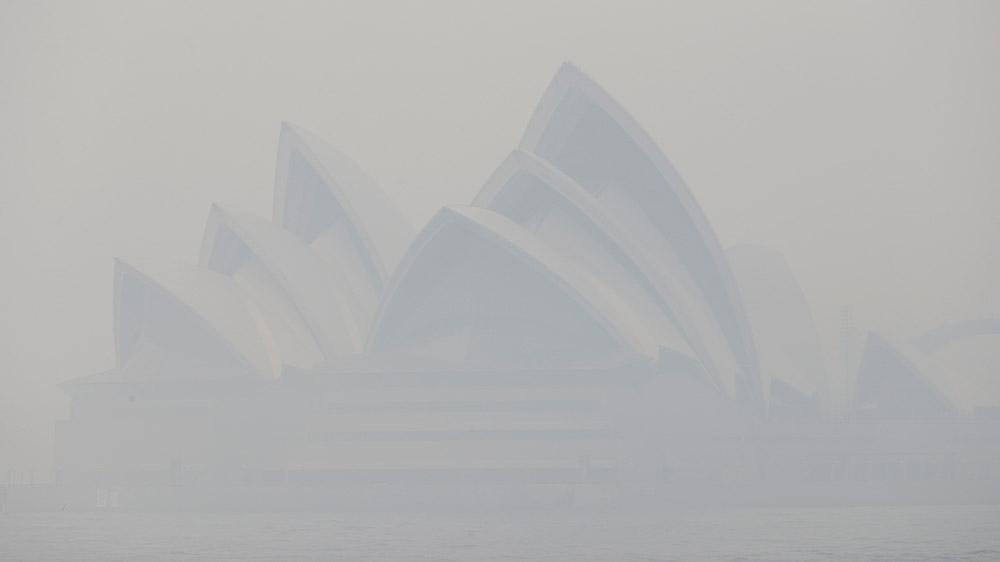 Thick smoke from the fires has turned once blues skies grey, shrouding the city in a toxic smog [File: Rick Rycroft/AP Photo]