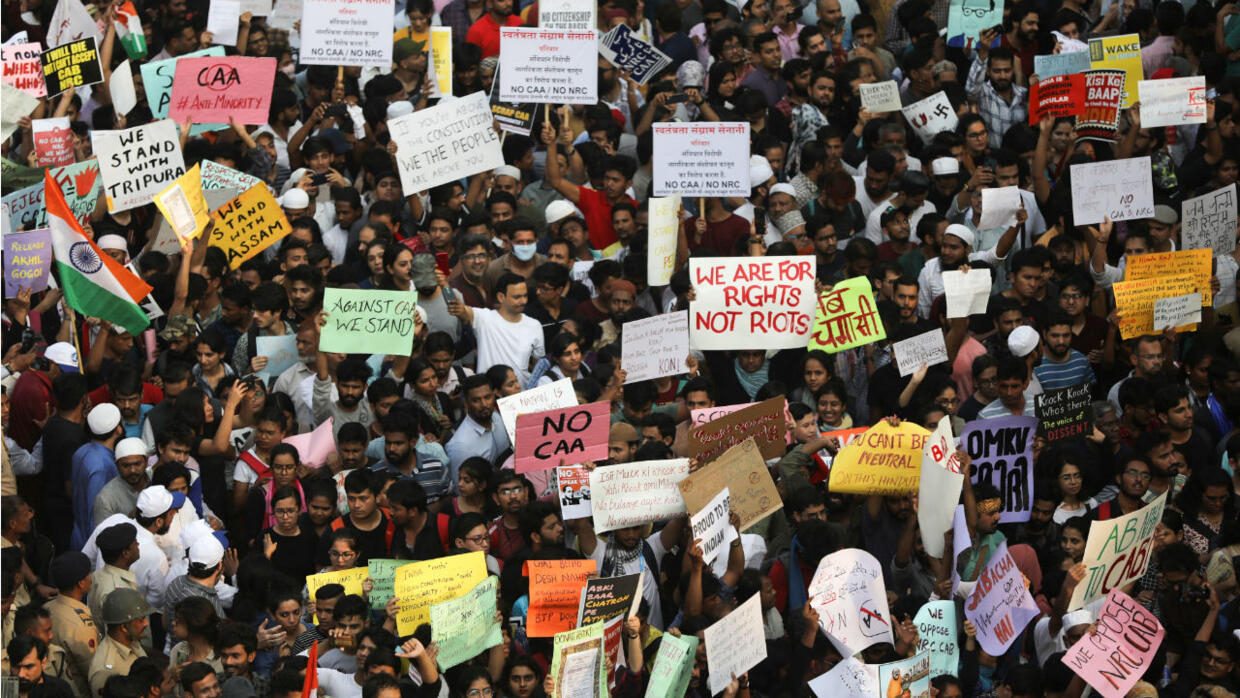 Authorities erected road blocks and disrupted internet and phone services, including in parts of the capital, New Delhi, and tightened restrictions on protesters in Assam, the northeastern border state, which saw the first protests against the law.

Protesters clashed with security forces in a number of states, including Uttar Pradesh, Gujarat and Karnataka. Two people died of injuries in the southern Indian city of Mangaluru, according to hospital officials. At least one of the two dead had been shot, said medical officials.

Hundreds of protesters were arrested and bundled into police vehicles, including renowned Indian historian Ramachandra Guha, who was giving an interview to reporters in the southern city of Bangalore when police arrested the 61-year-old academic.

Guha told New Delhi TV on Thursday evening that police crammed him and hundreds of others who were detained into a wedding hall and let them leave later without explanation.

“As abruptly arrested, we were abruptly released,” he said.

Yogendra Yadav, another prominent Indian activist and academic, was also arrested while protesting in Delhi. The chief of the secular Swaraj India party, he was among the more than 100 protesters detained at the city’s iconic Red Fort (Lal Qila in Hindi) and the surrounding historic district.

Protesters loaded into buses and jeeps shouted “down with Delhi police” as they were driven away.

I have just been detained from Lal Qila. About a thousand protesters already detained. Thousands on the way.
Am told we are being taken to Bawana.

Marches were peaceful in other places, including Mumbai, where more than 5,000 people gathered in an unprecedented display of public discontent in the city’s financial capital. Crowds filled up the city’s iconic August Kranti Maidan, where India’s founding father Mahatma Gandhi launched his Quit India movement in August 1942 against British colonial rule.

Haroon Patel, an Indian citizen who lives in London, joined the protest in Mumbai, calling the new law the first step towards dictatorship. “We have to save the country,” said Patel.

The new citizenship law applies to Hindus, Christians and other religious minorities who are in India illegally but can demonstrate religious persecution in Muslim-majority Bangladesh, Pakistan and Afghanistan. It does not apply to Muslims. Critics say it’s the latest effort by Modi’s Hindu nationalist-led government to marginalise India’s 200 million Muslims.

Modi has defended it as a humanitarian gesture.

Internet and phone services were intermittently suspended in a number of places Thursday, including parts of Delhi, mobile carriers said, widening a communications clampdown in restive areas stretching from disputed Kashmir to the northeast.

Rather than contain uprisings, the protest bans appear to be helping them spread – from Assam and a handful of university campuses and Muslim enclaves in the capital – to campuses and cities from coast to coast.

“I think what is wonderful is that young people all in their 20s have so vividly understood the game plan, which is to divide people,” said Zoya Hasan, a political scientist in New Delhi. “What people are saying is that you are going to divide, we are going to multiply.”

Dozens of airline flights out of Delhi were cancelled due to a lack of staff who were held up by traffic disruptions caused by protesters, and a number of Delhi metro stations closed.

A senior home ministry official said maintaining law and order was a state responsibility but reserve forces were ready to provide immediate assistance.

‘A crack in the edifice’

The protests come amid an ongoing crackdown in Muslim-majority Kashmir, the restive Himalayan region stripped of its semi-autonomous status and demoted from a state into a federal territory last summer. They also follow a contentious process in Assam meant to weed out foreigners in the country illegally. Nearly two million people were excluded from an official list of citizens, about half Hindu and half Muslim, and have been asked to prove their citizenship or else be considered foreign.

India is also building a detention centre for some of the tens of thousands of people the courts are expected to ultimately determine have entered illegally. Modi’s interior minister, Amit Shah, has pledged to roll out the process nationwide.

Critics say the process is a thinly veiled plot to deport millions of Muslims.

The Modi government, which won a landslide re-election in May, had been able to push through those parts of its agenda without much opposition. That changed with the citizenship law.

“This may be a crack in the edifice” of the Modi government, said Nilanjan Mukhopadhyay, a political analyst and Modi biographer.

Some of the country’s unwieldy and divided opposition parties have found common ground in condemning what they say has been a heavy-handed official response to the protests.

It’s a good rallying point for the opposition because it is “a battle for liberal and democratic values”, said Asaduddin Owaisi, a lawmaker and president of the All India Majlis-e-Ittehadul Muslimeen party.

“In this country we do not even have freedom to protest. It’s very disappointing,” said Upika Chahan, a social worker who took the day off work to protest at Red Fort.

Chahan, who is Sikh, said that while the citizenship law doesn’t discriminate against her religious group, it doesn’t augur well for India.

(FRANCE 24 with AP and REUTERS)