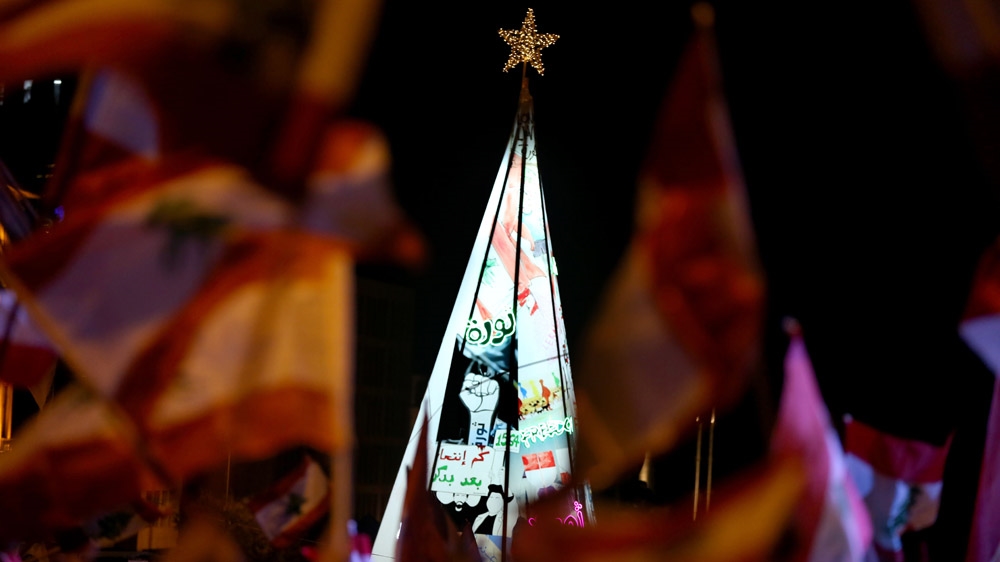 “We want to take part in this celebration, but the situation in the country, the poverty and lack of work has made it difficult,” the 55-year-old father of two said.

Issaoui stood in line to receive presents donated by demonstrators at a protest encampment in Beirut’s Martyrs’ Square, the centre of an uprising against the ruling elite that began in mid-October.

“I thank God there are some who empathise with us, it really does raise our spirits,” he told Al Jazeera.

On Monday night, a Christmas dinner was served to about 1,000 people in Martyrs’ Square, with volunteers cooking under a Christmas tree adorned with symbols of the uprising.

Small initiatives like these have offered some hope to those struggling amid Lebanon’s worst economic and financial crisis since the country’s 15-year civil war. The currency has depreciated by 30 percent since September over its pegged rate to the dollar.

But for many in the country, this Christmas remains a bitter one. In the past few months, scores of businesses have shut their doors, while many others have laid off workers, reduced their operations or paid only half salaries.

A dollar shortage has led banks to introduce informal capital controls on both dollars and local currency, leaving many unable to withdraw their meagre earnings and shaking confidence in the country’s banking system, long seen as a pillar of stability.

The country’s economic collapse has been exacerbated by the country’s continuing political crisis. Lebanon has been without a government since October 29, when former Prime Minister Saad Hariri resigned amid mass protests.

President Michel Aoun last week tasked former education minister Hassan Diab with forming a government, but Diab faces an uphill battle to reconcile the varying demands of parliamentary blocs and convince protesters, many of whom have already voiced opposition to the politician.

Meanwhile, the crisis has filtered down to those who struggled before the latest crisis hit.

The father of four received a few bags of sweets, colouring pens and a drawing book from volunteers, which he said would be the only presents he could offer this year.

“I’ve never been worse off. My kids haven’t eaten meat for three weeks, there is no Christmas cheer, there is nothing to be happy for,” said Mohammad, who wished to only go by his first name. “I don’t even have the money to get a bus to my home,” he added, walking off towards Beirut’s Hamra district.

It is unlikely the situation will improve any time soon, according to Dan Azzi, an expert on Lebanon’s finances and former chairman and CEO of Standard Chartered Bank.

“Politicians need to stop messing around, else they preside over the biggest collapse in the history of Lebanon,” Azzi told Al Jazeera.

He said that the best-case scenario depended on immediate, decisive measures being implemented as soon as possible. This includes formal, transparent policies to manage the flow of capital in and out of the country, and targeted tariffs, including on luxury cars.

He also advocates for so-called financial haircuts or the confiscation of a certain percentage of the highest depositor accounts. He said that some $90bn in Lebanon’s banks was held by just 6,000 depositors

Much of that money is the result of high interest rates Lebanese banks put in place to attract dollars.

“It’s fake money,” Azzi said. “It’s unearned interest that has been subsidised by the Lebanese public. So you need to go in and give them a big haircut and then you can move on to focusing on creating a real economy,” he said.

If state policies remain unchanged, Azzi said Lebanon was heading towards the “Mad-Max scenario”, a reference to the dystopian film of the same name, set after the collapse of civilised human life.

“If we keep procrastinating and wasting time, or get a government that doesn’t have the know-how or the intestinal fortitude to execute the right decision, then we go to a Mad Max-type scenario,” Azzi said.

There have already been signs of brewing chaos at banks in Lebanon, with a number of depositors refusing to leave until they are given their cash. In one video, a man says he would “burn the bank” if he was not given his money.

Back in Martyrs’ Square, many clung to any hope they could find in the generosity of others.

Clasping four books bound in cheerful Christmas wrapping, Ahmad, 53, said that he hoped 2020 would be “a year of revenge,” against corrupt politicians.

“Everything is getting worse, but we have hope in the revolution, that these corrupt ones are soon heading to their execution,” Ahmad, who wished to only go by his first name, added. “We still have our dreams.”