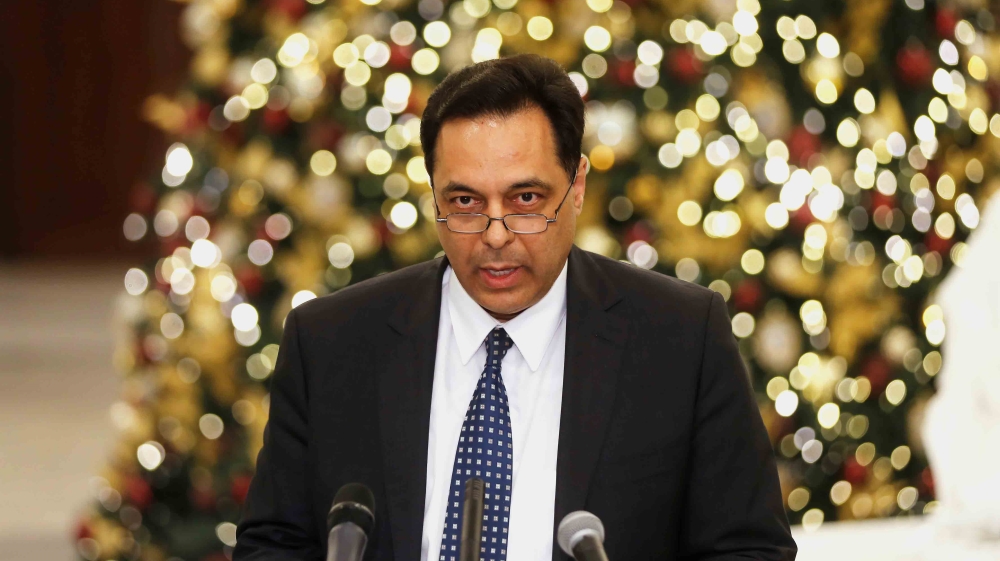 On December 19, Lebanese President Michel Aoun named Hassan Diab as the country’s next prime minister after a slew of candidates for the position failed to receive enough political support.

Diab had been put forward by Hezbollah and its allies in the Lebanese parliament, among them Speaker Nabih Berri’s AMAL Movement and the Free Patriotic Movement (FPM) headed by the president’s son-in-law and foreign minister, Gebran Bassil.

Immediately after Diab was named, and despite the latter’s assurances that he will form a government that addresses the many problems facing the country, protests broke out in the streets decrying the formation of what is considered a Hezbollah government that will aim to abort the ongoing uprising.

The protesters have demanded the end of the sectarian system and the appointment of a politically independent premier who would form a government of unaffiliated experts and technocrats to write a new electoral law and conduct early parliamentary elections. So far, they have failed to realise these demands.

But even according to the power-sharing system in use today, where the prime minister has to be a Sunni Muslim, Diab is not likely to succeed. Having scant support among his Sunni community and former Prime Minister Saad Hariri’s Future Bloc in parliament, he lacks the political backing to be a strong prime minister vis-a-vis President Aoun and the Hezbollah-AMAL alliance.

Protesters doubt his ability to address their demands of fighting corruption and it is hard to see how Diab will be able to manage the panoply of political and economic troubles the country faces. Domestic, regional and international circumstances make his political success unlikely.

Since the 1975-1990 civil war and following the ignominious withdrawal of Syrian troops in 2005, Lebanon has witnessed divisions, confrontations and frequent stalemate. The last three years, however, have been especially troublesome.

The October 2016 political deal which gave Aoun the presidency in exchange for Hariri getting the premiership became increasingly hard to maintain as the president, supported by Hezbollah, deprived his prime minister of his prerogatives as chief executive.

Ever the opponent of the 1989 Taif Accords, which charted the post-civil war period and strengthened the position of the prime minister, Aoun has, since becoming president, tried to restore the powers of the Maronite president in the executive branch, such as choosing ministers. This came on top of Hariri’s troubles running an unwieldy government of national unity.

Today, Diab – an academic who has never run for public office or built a political base of his own – is at the mercy of the same Hezbollah-AMAL-FPM alliance without much discernible support from his own community. He thus starts his tenure limping, as protesters in the street are demanding the appointment of a strong leader who represents a popular base and who is capable of fighting corruption and nepotism.

The immediate impact of Diab’s institutional weakness will manifest itself in his expected inability to curb Hezbollah’s power and influence in state institutions. Like Hariri and others before him, Diab will also fail to check the party’s status as an armed militia with independent decision-making and a state within the state.

With Hezbollah claiming the current street protests were inspired by outsiders, mostly the United States, to weaken “the resistance”, it is impossible to imagine that it will assist its choice for prime minister in reasserting the Lebanese state’s primacy over all factions in the country.

Equally problematic for Diab will be dealing with the country’s teetering economy. Ratings agency Fitch has recently downgraded the country’s credit rating and warned that Lebanon is either going to restructure its debt, which amounts to 150 percent of its gross domestic product (GDP), or default on it.

This year Lebanon’s public debt reached $86bn, while its budget deficit remained at 11 percent. Restructuring or defaulting will be calamitous considering the lack of trust of outside investors, the absence of funds to stimulate the economy, and the limited impact of any action by Lebanon’s Central Bank, which has so far instituted some monetary changes to try to halt the decline.

Furthermore, a weak prime minister and government can offer no concrete solution to the rampant corruption that has beset Lebanon for decades and led to the current uprising.

The same goes for necessary efforts to reform state agencies and the judiciary where entrenched interests coincide with political power to protect influential personalities and politicians.

While Lebanon’s troubles and street demonstrations are caused primarily by domestic dynamics, the country’s regional environment exacerbates the situation.

Bereft of a strong position within his Sunni community, Diab lacks the basic characteristic for attracting support from regional powers, such as Saudi Arabia and Egypt. Even Hariri, who inherited his father Rafiq’s connections in the Gulf and other parts of the Arab world, had difficulties maintaining good relations with Riyadh after his 2016 deal with Aoun and Hezbollah.

In November 2017, the Saudis even put him under house arrest in Riyadh and forced him to resign before French President Emmanuel Macron intervened.

Regionally, Diab’s premiership will be viewed as part of the tug of war between Saudi Arabia and Iran, as the latter scored yet another victory in Lebanon with his appointment. Granted, the kingdom and the Islamic Republic may be testing the possibility of patching things up, but Riyadh still resents Tehran’s influence in Beirut through Hezbollah.

The reluctance of Saudi Arabia and other Gulf states to fund Lebanon at this crucial time is another obstacle for Diab to surmount. Their financial assistance in the form of deposits in the Central Bank, for instance, could restore investors’ trust and encourage the bank to increase liquidity in the domestic market.

But for them to do so, Diab needs to dissipate doubt about his relationship with Hezbollah and to show that he can be independent of the party’s bidding – a rather unlikely scenario given his institutional weakness.

Looking at the international scene, it is also difficult to see how Diab can muster enough political and economic support for his mission. While many actors value their relationship with Lebanon and understand the country’s political dilemmas, they remain convinced that its troubles can only be solved if protesters’ demands are addressed directly.

A conference convened in Paris on December 11 failed to reach agreement on financial assistance to the country so long as it does not have a functioning government committed to reform. Without such assistance, all bets are off that things will be better in the foreseeable future.

After Diab forms his government, he is likely to run into some very unpleasant circumstances. While the US may want to go easy on the prime minister-designate, his association with Hezbollah is likely to at the very least dampen any American enthusiasm for his government.

On December 20, US Assistant Secretary of State David Hale paid a visit to Lebanon and met the country’s leaders but remained uncommitted to providing blanket support, instead diplomatically stating that the US has no say in the formation of the government.

On the same day, Aoun asked Diab to form a government, Germany’s parliament passed a resolution calling for a ban on Hezbollah activities on German soil. This could affect relations between Berlin and any Lebanese government perceived to be cooperating with the party.

Similar bans have been adopted by the United Kingdom, the Netherlands, the US and Canada. While France has tiptoed around a decisive break with Hezbollah and Iran, President Macron cannot break with the US, Germany, the UK, and others to offer help to Diab.

Diab’s association with Hezbollah and loss of political and financial support from influential international actors will stymie his ability to address the dire economic situation. This will likely increase the party’s and Iran’s influence on Lebanese politics, thus only exacerbating Diab’s and the country’s problems.

Diab likely to preside over collapse

Although Diab has asserted that his government will be independent and made up of experts, demonstrators see it as beholden to Hezbollah.

President Aoun and his allies Hezbollah and AMAL know that Diab does not have the support of a specific political bloc and, therefore, has no chance of success in fulfilling the demands of the Lebanese protest movement.

He may only have been chosen because he is no threat to the current president and will not try to limit Hezbollah’s influence in state institutions.

Diab will probably soon have the distinct misfortune of presiding over the final political, economic and social collapse of Lebanon. While he will be able to find a majority in parliament that can help him shepherd a limited reform programme – the same majority that helped him get the post – he will not be able to mollify the Lebanese public which sees no hope in the current political system.

Simultaneously, his association with Hezbollah is unlikely to raise the regional and international communities’ interest in helping his government undertake the radical economic programme the country needs to correct its path forward.

His tenure, however long it will be, will thus be yet another episode of the type of failed governance which the Lebanese people have been protesting against since October.

Perhaps the time has come for Lebanon’s current elites to allow for the change demonstrators are demanding: an overhaul of the political and economic systems that can pave the road for a more modern polity and more equitable society.

The views expressed in this article are the author’s own and do not necessarily reflect Al Jazeera’s editorial stance.