Australia’s navy on Friday began evacuating about 1,000 people stranded on the east coast of the fire-ravaged country as a searing weather front was set to whip up more blazes across the states of Victoria and New South Wales (NSW).

At the peak of the summer holiday period, tens of thousands of holidaymakers have been urged to leave national parks and tourist areas on the NSW south coast and eastern areas of Victoria before a return of temperatures above 40 degrees Celsius (104 degrees Fahrenheit) and hot winds expected on Saturday.

Victoria declared a state of disaster for the first time, giving authorities broad powers to compel people to leave their properties and take control of services, similar to the state of emergency that has been declared in NSW.

Andrew Crisp, the emergency management commissioner for Victoria, urged people in at-risk areas to leave their homes immediately and not count on luck to avoid disaster.

Another death from the fires in NSW was confirmed on Friday, taking the toll in the state to eight just this week.

Two people have died in Victoria’s fires, and 28 others are unaccounted for.

The navy’s HMAS Choules and Sycamore started the evacuations of nearly 1,000 of the 4,000 people stranded on a beach in the isolated town of Malla­coota in far-east Victoria, federal member of parliament Darren Chester tweeted on Friday morning.

With all roads blocked, sea transport and some airlifts are the only way out of the stricken town.

Prime Minister Scott Morrison had called for calm on Thursday, before visiting the fire-devastated NSW town of Cobargo where he was not entirely welcome.

A video clip showed showed Morrison confronted by a group of angry locals, one of whom shouted he should be “ashamed of himself” and said he had “left the country to burn”. 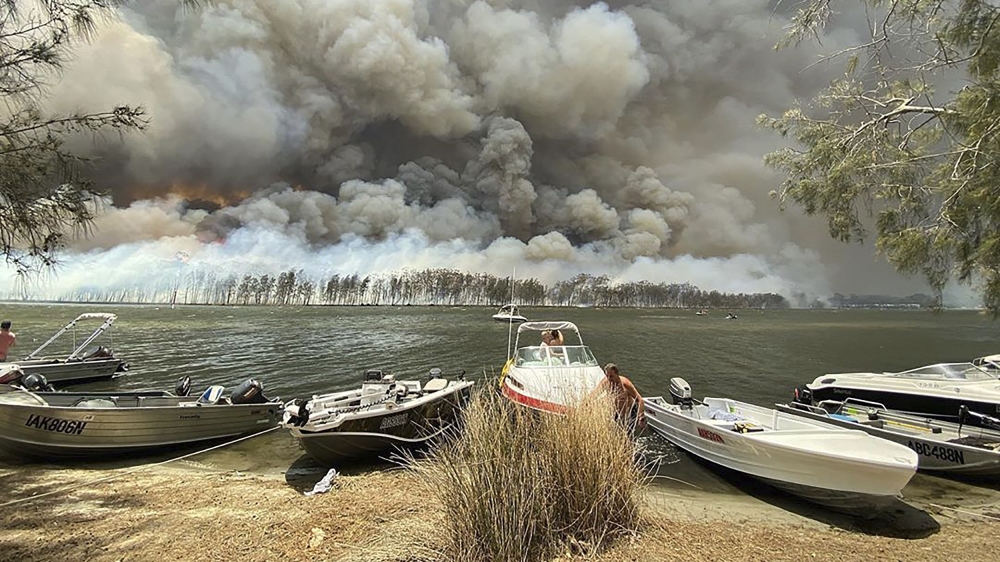 Boats are pulled ashore as smoke and wildfires rage behind Lake Conjola, Australia on Thursday [Robert Oerlemans via AP]

On Friday, Morrison said he understood people were angry, and would not be distracted if they directed their anger at him.

“People have suffered great loss. People are hurting. People are raw. That’s what happens in natural disasters,” he said.

Morrison’s conservative government has long drawn criticism for not doing enough to address climate change as a cause of Australia’s savage drought and fires.

Bushfires so far this season have scorched more than 4 million hectares (10 million acres) of bushland and destroyed more than 1,000 homes, including 449 homes destroyed on the south coast this week.