“I’m only shaking your hand if you give more funding to the RFS,” said Cobargo resident Zoey McDermott in widely-circulated footage, referring to the NSW Rural Fire Service.

“So many people here have lost their homes. We need more help,” she pleaded.

Instead of comforting her, Morrison forced her to shake his hand, patted her shoulder, and walked away after saying nothing more than “I understand”. McDermott, whose house was destroyed by the fires, is 28-week pregnant and the mother of a two-year-old girl.

Other locals in the background could be heard yelling “you’re an idiot” and swearing at Morrison, saying he should “be ashamed of himself” after he went on holiday to Hawaii and “left the country to burn”.

The local member of parliament, Andrew Constance, later told the media that Morrison “got the welcome he probably deserved” in Cobargo. Constance is from the Liberal Party, the same party as Morrison.

An RFS firefighter in Cobargo also refused to shake the prime minister’s hand. Morrison later asked the local incident controller to apologise to him, saying he was “probably just tired”. The incident controller responded that the man had, in fact, lost his house.

In nearby Nelligen, an RFS firefighter named Paul Parker pulled his truck over when he saw a television cameraman. 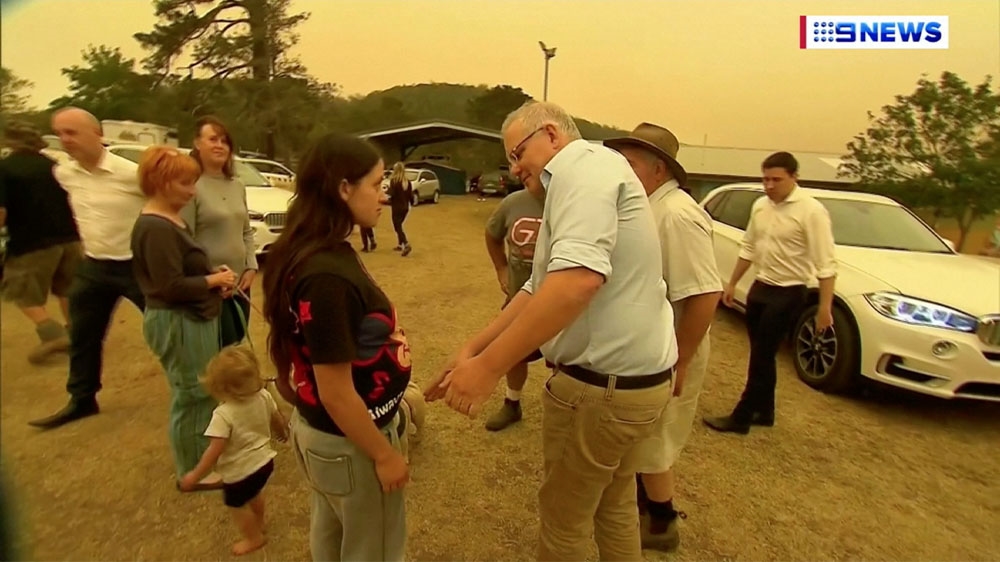 Australia’s Prime Minister Scott Morrison was rebuffed when he attempted to shake hands with a resident of the bushfire-stricken town of Cobargo on January 2 [File: Nine Network via Reuters TV]

“Are you from the media?” Parker yelled out of the window, fury clear on his face. “Tell the prime minister he can go and get f***ed!”

Several homes and businesses were lost on the state’s southern coast when a massive bushfire tore through on New Year’s Eve. Eight people have died in the region, including in Cobargo where a man and his son were killed defending their home.

Cobargo was the first fire-ravaged town Morrison visited. The fires have so far burned more than 8.5 million hectares (21 million acres) of land, destroying thousands of properties and killing at least 26 people. Wildlife has also suffered badly, with ecologists estimating one billion animals have been killed or injured.

Morrison has been heavily criticised for his lacklustre response to the bushfire crisis, and many are suggesting he should resign as prime minister or at least adopt policies that will tackle climate change.

“There is already a strong, broad sentiment in Australia about the increasing importance of reducing emissions,” said Ketan Joshi, a renewable energy and climate change writer. “It has been building over 2019, accelerated by the climate strike and Extinction Rebellion movements.”

Joshi explained that Morrison’s attempts to present climate inaction as action are no longer being believed by the public.

“2020 will be a year in which there is even greater focus on climate change,” he said. “It will be the biggest issue in the country, and it will haunt Scott Morrison for the whole year.”

Publicly, Morrison has brushed off the criticism. “People are angry,” he told the media. “And if they want to direct that at me, that is up to them … I don’t take it personally.”

Morrison became prime minister in August 2018 after an internal battle for the party leadership, and led the Liberal Party to a surprise victory in elections eight months later. Morrison’s campaign centred around his image of being a practical man capable of protecting common Australians from the things they feared most – allegedly immigrants and job losses. 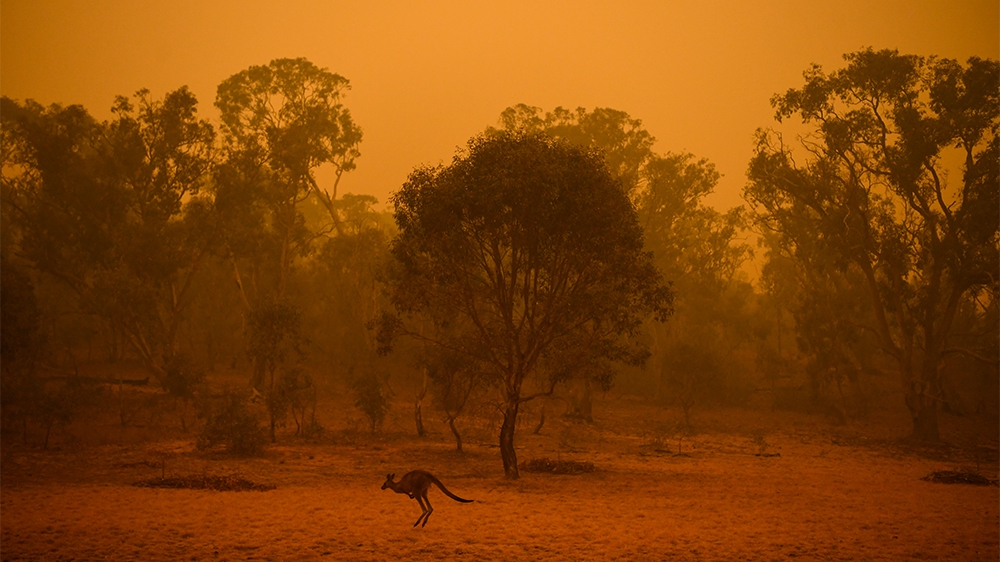 The fires have devastated Australia’s unique wildlife, with ecologists now estimating about one billion animals have been killed or injured as a result of the fires [Lucas Coch/EPA]

By early December, more than 2 million hectares (5 million acres) of land had been burned and hundreds of homes lost. A state of emergency was declared in NSW but Morrison refused to meet former emergency service leaders, who had twice asked to talk about the situation.

More than 100 fires were burning in NSW when Morrison left for a family holiday in Hawaii, despite describing the situation as a “natural disaster”.

The Prime Minister’s Office did not tell the Australian public that he was out of the country. Ironically, for a prime minister with a background in marketing, it was not until Morrison was photographed with Australian holidaymakers relaxing on the beach on the Pacific island that it was revealed where he was.

“It has definitely damaged Morrison in the short term, but now a whole infrastructure is swinging in behind him in a coordinated way,” former deputy leader of the Australian Greens, Scott Ludlam, told Al Jazeera. Ludlam was on the NSW south coast when the fires picked up on New Year’s Eve and was forced to evacuate with thousands of others.

“This will be a test of whether post-truth politics can survive when something massive and real happens,” Ludlam concluded. 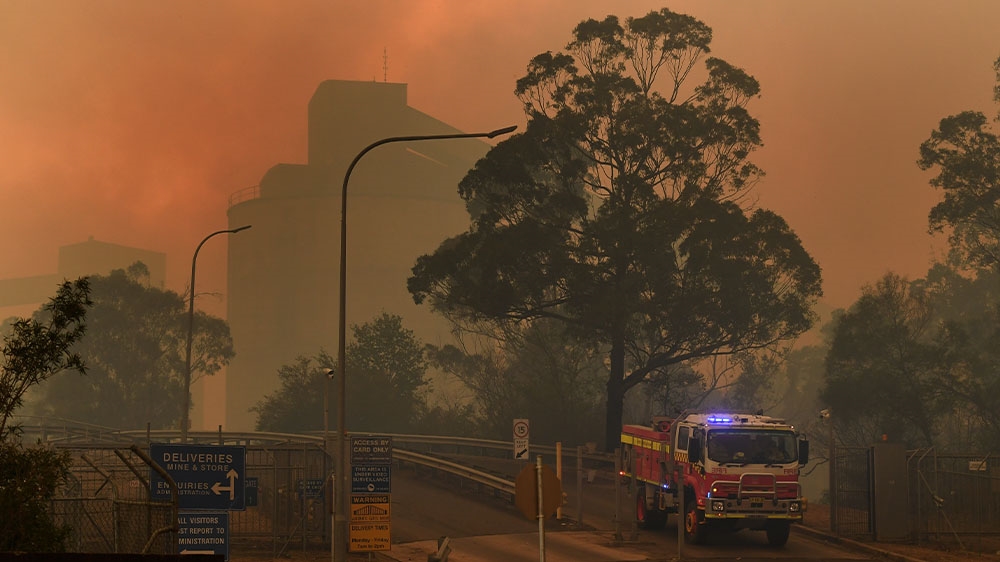 A fire truck at the Simec Coal Mine in New South Wales as high temperatures and strong winds fanned bushfires in the state; Australia is one of the world’s biggest exporters of coal and heavily reliant on fossil fuels [Dean Lewins/EPA]

The Liberal Party, which rules in coalition with the National Party, has been largely dismissive of climate change.

David Littleproud, the minister for drought and natural disasters, has previously commented that he did not “know if climate change was man-made”, while Deputy Prime Minister Michael McCormack said that climate change was nothing more than “the ravings of some pure, enlightened and woke capital-city greenies”. McCormack was acting prime minister while Morrison was in Hawaii.

Just last week, Morrison himself said “the suggestion … that the individual actions of Australia are impacting directly on specific fire events, whether it’s here or anywhere else in the world, that doesn’t bear up to credible scientific evidence”.

“This catastrophe impacts millions of people, and they watched Morrison holiday in Hawaii while the country burned,” said Joshua Badge, a political philosopher at Deakin University in Melbourne.

“Some commentators thought that Morrison was a shrewd operator given how he rose from Turnbull’s ashes,” Badge told Al Jazeera. “But Morrison’s curated “daggy dad” gimmick has backfired by making him look incompetent.

“His ‘don’t rock the boat’ leadership style worked in the past but has failed in a crisis. By pretending like everything was fine rather than admit his mistakes, it makes Morrison seem unaware and indifferent.”

Even foreign leaders have commented on Morrison’s handling of the bushfire crisis. Cambodian Prime Minister Hun Sen nodded towards Morrison when he said no government officials would be expected to resign following a six-storey building collapse that killed at least 36 people.

“Let me ask you, the Australian prime minister took his children to the US while wildfires are happening in the country,” local media reported Hun Sen saying. “He was widely condemned, but has he resigned?”

Pacific nations, oft-dismissed themselves by the Liberal Party as islands that will soon be underwater, are helping with the relief effort. Papua New Guinea, Australia’s biggest recipient of international aid, will send 1,000 soldiers and firefighters to battle the blazes, while Vanuatu has promised to contribute 20 million Vatu ($173,000).

It is unlikely that the Liberal Party will internally vote to replace Morrison as the leader and prime minister. After Morrison unseated then-leader Malcolm Turnbull in August 2018, he introduced a new rule for leadership contests, requiring a two-thirds majority to trigger a vote.

Public pressure for Morrison to resign is strong, but a social media misinformation campaign that blames the fires on state governments, the Australian Greens, and arsonists has also emerged. Morrison has also announced a 2 billion Australian dollars ($1.4bn) fund for recovery efforts.

But Australians are increasingly angry. Large protests are planned across the country on Friday to demand action on climate change.