Here are the latest updates:

Iceland has ordered the closure of entertainment venues and pubs in the capital area for four days between September 18-21 in order to counteract the spread of COVID-19, the government said in a statement.

The European health regulator endorsed the use of widely known steroid dexamethasone in the treatment of COVID-19 patients on oxygen or mechanical ventilation.

The European Medicines Agency (EMA) said based on its review of results of a study by UK researchers, it concluded that dexamethasone – a commonly used drug against a range of inflammatory conditions – can be considered a treatment option in adults and adolescents needing oxygen therapy.

The recommended dose in adults and adolescents, from 12 years of age and weighing at least 40 kgs, is 6 milligrams once a day for up to 10 days, the EMA said.

Russia has approved R-Pharm’s Coronavir treatment for outpatients with mild to moderate COVID-19 infections and the antiviral drug could be rolled out to pharmacies in the country as soon as next week, said the company.

Coronavir’s approval follows the green light for another Russian COVID-19 drug, Avifavir, in May. Both are based on favipiravir, which was developed in Japan and is widely used as the basis for viral treatments.

R-Pharm’s announcement is another sign Russia is pushing hard to take a global lead in the race against the virus. It is already exporting its COVID-19 tests and has clinched several international deals for supplies of its Sputnik V vaccine.

The city of Nice on the French Riviera will ban gatherings of more than 10 people in public spaces and tighten rules on alcohol consumption outdoors as it seeks to curb COVID-19 infections that are soaring in the region, according to local authorities.

France registered a record 10,593 new confirmed coronavirus in the past 24 hours, health ministry data showed on Thursday, the country’s highest single-day count since the pandemic began.

09:25 GMT – US CDC testing guidance was published against objections: Report

US President Donald Trump’s administration posted controversial recommendations on coronavirus testing to the website of the country’s health agency against the objections of its scientists, according to a New York Times report citing people familiar with the matter and internal documents.

The guidelines, which said testing was not necessary for people who were exposed to COVID-19 but not displaying symptoms, were criticised when they were issued last month.

To get to know more, read the full story here.

A surge in COVID-19 infections in the Czech Republic accelerated, with more than 3,000 cases reported in a single day for the first time, a day after the daily tally first exceeded 2,000.

The country has seen one of the biggest spikes in new coronavirus infections in Europe, with daily case numbers quickly growing from the hundreds into the thousands.

The government has reacted by tightening measures, including limiting bars’ opening hours from Friday, banning stand-up indoor events and widening mask use in schools.

Scott Morrison, the prime minister of Australia, has said his government will increase the number of citizens allowed to return home each week to 6,000 people.

Speaking to reporters after a cabinet meeting on Friday, Morrison said states have agreed to boost quarantine capacity and that the cap on the number of people allowed into Australia each week will increase by 2,000 by mid-October.

The country’s weekly limit is currently set at 4,000 people.

Israel is about to enter a second nationwide lockdown at the onset of the Jewish high-holiday season, forcing residents to stay mostly at home amid a resurgence in new coronavirus cases.

The new lockdown, which is due to begin at 2pm (1100 GMT) and will last three weeks, coincides with the start of the Jewish New Year, Rosh Hashana, traditionally a time for large family gatherings and group prayer. 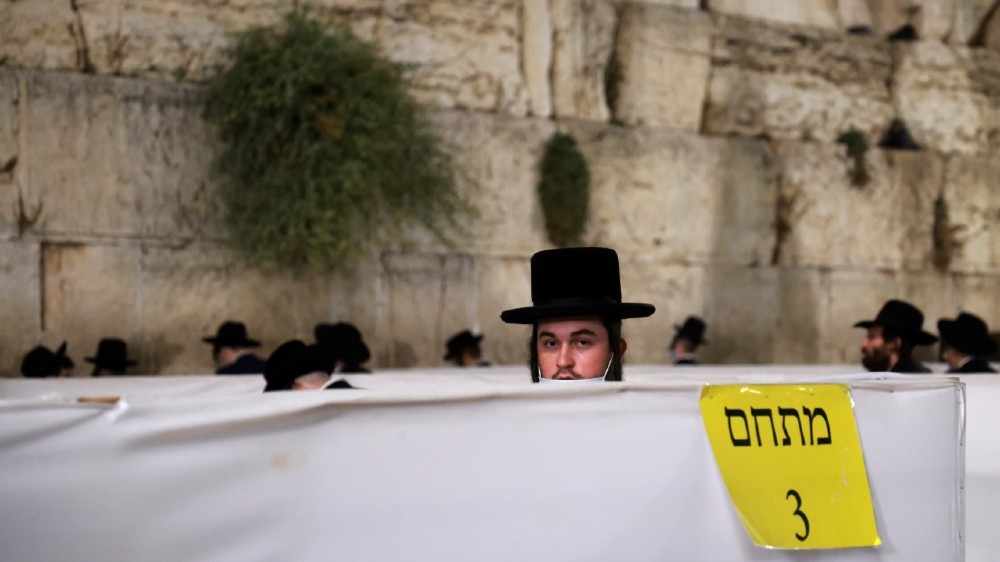 Ultra Orthodox Jews keep social distancing inside dividing cells while participating in the Slichot prayer, the last prayer on the eve of Rosh Hashana, the Jewish New year, at the Western Wall in Jerusalem’s Old City [Emmanuel Dunand/AFP]

Under the new rules, Israelis must stay within 500 metres (546 yards) of home, with exceptions for activities such as commuting to work, shopping for essentials and walking outdoors for exercise. Workplaces will operate on a limited basis.

Social distancing and limits on the number of worshippers will go into effect at synagogues, usually packed for Rosh Hashana and Yom Kippur, the Jewish Day of Atonement that begins at sunset on September 27.

Thailand reported its first coronavirus death in more than 100 days, a health official said, after an infected Thai citizen had returned from abroad earlier this month.

The 54-year old man, who was an interpreter based in Saudi Arabia working for the Thai labour ministry, had been treated in a Bangkok hospital for two weeks and died on Friday, Somsak Akksilp, head of the Department Medical Services, told Reuters.

The coronavirus is accelerating across the country with hospital admissions doubling every eight days, said Britain’s health minister, adding that he is unable to answer whether or not another national lockdown would be imposed next month.

Asked repeatedly by Sky News about the prospect of a second national lockdown next month, Health Secretary Matt Hancock said that a lockdown was a last resort but that the government would do whatever it takes to tackle the virus.

“The number of people in hospital is doubling every eight days or so … we will do what it takes to keep people safe,” Hancock said. “We keep these things under review.”

Asked about a second lockdown, he said: “I can’t give you that answer now.”

“It remains a practice that is highly recommended,” Borne told a local radio.

Her comments were made after France registered a record 10,593 new confirmed coronavirus in the previous 24 hours. The death toll also rose by 50 to 31,095, the second-highest daily number of deaths in two months.

Hi, this is Virginia Pietromarchi taking over the coverage of the coronavirus pandemic from my colleague Zaheena Rasheed.

India’s coronavirus cases jumped by another 96,424 infections in the past 24 hours, showing little sign of levelling.

India is expected to have the highest national total of confirmed cases within weeks, surpassing the United States, where more than 6.67 million people have been infected.

Leaders of Europe’s coronavirus-stricken travel and tourism industries have appealed to the EU’s chief executive to press governments to end quarantine requirements and instead embrace coordinated restrictions and testing.

The appeal came as data from airports’ group ACI Europe, one of the signatories to the September 17 letter, pointed to a “double-dip” air traffic slump, with passenger numbers down 73 percent in the first two weeks of September, after a 65 percent decline in August.

The Australian government is expected to announce an increase in the number of citizens able to return home after a National Cabinet meeting later on Friday, where states will be asked to boost quarantine capacity.

Prime Minister Scott Morrison is seeking to raise the cap on the number of people allowed into Australia each week by 2,000 from next Friday.

The country’s weekly limit is currently set at 4,000 people but there are an estimated 25,000 stranded Australians wanting to return home which the government has pledged to facilitate before Christmas.

New Zealand reported no new confirmed cases of the coronavirus for the first time in more than five weeks as hopes rise that an outbreak discovered in Auckland last month has been stamped out.

Friday’s report also marked the fourth consecutive day without any cases of community transmission. All recent cases have been found among quarantined travellers returning from abroad.

Authorities have still not pinpointed the origin of the August outbreak, which they believe was imported. New Zealand has reported a total of just over 1,800 cases and 25 deaths.

The United States House of Representatives voted to condemn racism against Asian Americans tied to the coronavirus outbreak, approving a Democratic resolution on a mostly party-line vote.

The resolution, approved 243-164, calls on all public officials to condemn anti-Asian sentiment and to investigate hate crimes after a rise in aggression and violence from those blaming people of Asian descent for the pandemic.

The measure does not name Trump but notes inflammatory terms used by him and other Republicans – including “Chinese Virus,” “Wuhan Virus,” and “Kung flu” – and says they have perpetuated an anti-Asian stigma.

Serbia will require all travellers returning from areas it considers high-risk for COVID-19 to fill in an online form ahead of time.

The measure will help authorities quickly trace returnees who develop symptoms of the coronavirus, Serbian media reported. It comes into effect at 6pm local time on Friday.

Returnees will not be required to enter quarantine or produce a negative test at the border.

Health authorities in mainland China reported 32 new COVID-19 cases, all imported cases, marking the highest daily increase in more than a month and up sharply from nine cases reported a day earlier.

Although the latest increase still remains well below the peaks seen at the height of the outbreak in China early this year, it is the biggest since August 10 and suggests continued COVID-19 risks stemming from overseas travellers coming into the country as the pandemic rages on in other parts of the world.

Mainland China has not reported any local COVID-19 infections since mid-August.

US Democratic presidential candidate Joe Biden attacked President Donald Trump for disregarding the risks of the coronavirus, blaming him for thousands of unnecessary American deaths and vowing to mount a coordinated national response if elected.

“He knew it – he knew it and did nothing,” Biden told a CNN town hall. “It’s close to criminal.”

Australia’s coronavirus hot spot of Victoria reported its biggest daily rise in coronavirus infections in more than a week as the state began relaxing lockdown restrictions.

The southeastern state started easing curbs this week after a hard lockdown helped bring down the daily rise in infections to double-digits after it touched highs of more than 700 in early August.

Companies in the US state of California must compensate any workers who contract the coronavirus while on the job and must warn employees of any potential exposure to the virus under two laws that Governor Gavin Newsom signed on Thursday.

Business groups have criticised the measures as “unworkable”.

The law on informing employees requires that businesses tell workers whenever they have been exposed to someone who has either tested positive, been ordered to isolate or died because of the virus.

Ontario, Canada’s largest province, will fine people who hold social gatherings in defiance of new limits amid a spike in cases in the cities of Toronto and Ottawa, as well as a region just outside Toronto.

Starting on Friday in those three areas, only 10 people will be allowed to gather indoors – down from the current limit of 25. The number for outdoor gatherings will drop to 25 from 100.

Global confirmed coronavirus cases surpassed 30 million, according to a tally by the Johns Hopkins University, as the number of deaths from COVID-19 neared one million.

The United States remains the worst-hit country in the world, logging more than 6.7 million cases. India and Brazil had 5.1 million and 4.4 million cases, respectively.

Some 20.4 million people have recovered from the disease worldwide.

00:03 GMT – Rise in virus cases among refugees on Lesbos

Greece reported 135 cases of coronavirus infections among migrants and refugees made homeless by a fire at a large refugee on the island of Lesbos.

Notis Mitarachi, the migration affairs minister, said the infections were discovered after some 5,000 migrants were escorted by police to a temporary new site and given rapid tests for the coronavirus.

“Within days from the devastating fires in Moria, the new camp in Mavrovouni (Kara Tepe) has been erected and more than 5,000 people have found safe shelter within,” he said.

For all the key developments from yesterday, September 17, go here.