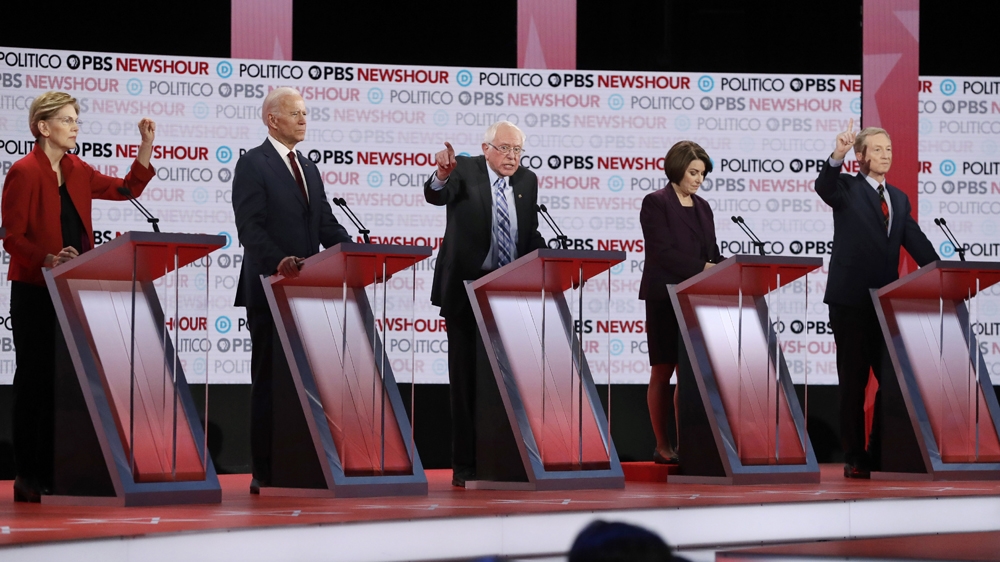 Democratic White House candidates attacked President Donald Trump but also clashed sharply with one another during the party’s Democratic debate, where a smaller field allowed lesser-known candidates to shine against the frontrunners.

The Democratic presidential candidates offered two very different debates during their final forum of 2019 on Thursday.

In the first half, they spent much of their time making the case for their electability in a contest with President Trump while the second half was filled with friction over money in politics, Afghanistan and impeachment.

The first question in the debate was about impeachment. But the answer from the Democratic candidates was about electability.

Most candidates had no answer to their party’s biggest challenge – getting Trump’s voters to abandon him over his conduct.

Senator Elizabeth Warren talked about one of her favourite themes: “Corruption” in Washington. Bernie Sanders talked about having to convince voters Trump lied to them about helping the working class.

Senator Amy Klobuchar, a former prosecutor, laid out the case against Trump as if she were giving the opening statement in his Senate trial.

Mayor Pete Buttigieg of South Bend, Indiana, said the party cannot “give into that sense of hopelessness” that the GOP-controlled Senate will simply acquit Trump because Republican voters are not convinced.

Only businessman Andrew Yang gave an explanation for why impeachment hasn’t changed minds.

“We have to stop being obsessed about impeachment, which strikes many Americans like a ball game where you know what the score will be.”

Instead, Yang said, the party has to grapple with the issues that got Trump elected – the loss of good jobs.

The candidates jousted cordially over the economy, climate change and foreign policy. But it was a wine cave that opened up the fault lines in the 2020 field.

That wine cave, highlighted in a recent Associated Press story, is where Buttigieg recently held a big-dollar Napa Valley fundraiser, and Senator Warren – who along with Sanders has eschewed fundraisers in favour of small-dollar grassroots donations – slammed him for it.

“Billionaires in wine caves should not pick the next president of the United States,” Warren said.

Buttigieg struck back, noting that he was the only person on the stage who was not a millionaire or billionaire. He said that if Warren donated to him, he would happily accept it even though she’s worth “ten times” what he is.

He also added that Warren and only recently sworn off big money donations.

“These purity tests shrink the stakes of the most important election,” Buttigieg snapped.

It was an unusually sharp exchange between Warren and Buttigieg. The two have been sparring as Warren’s polling rise has stalled out and Buttigieg poached some of her support among college-educated whites.

Democratic presidential candidates faulted Trump on multiple fronts for his failure to lead in key disputes and areas of international friction, including in the Middle East and China.

Buttigieg said Trump was “echoing the vocabulary” of dictators in his relentless attacks on the free press. Klobuchar said the president had “stood with dictators over innocents”.

And Tom Steyer warned against isolating the US from China, saying the two nations needed to work together on climate change.

On Israel, Biden argued that Trump had played to fears and prejudices and stressed that a two-state solution was needed for peace to ever be achieved.

The former vice president said Washington must rebuild alliances “which Trump has demolished”.