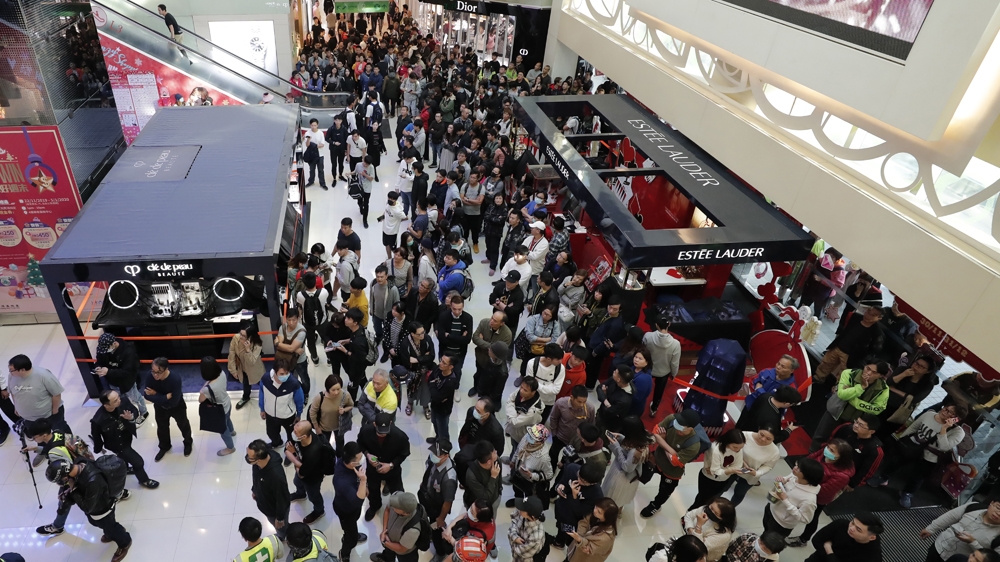 Police and protesters clashed at a Hong Kong shopping mall on Saturday where the latter were demanding mainland Chinese traders leave the territory in a fresh weekend of anti-government tension.

The protest in Sheung Shui, near Hong Kong’s boundary with the mainland, was part of efforts to pressure the government by disrupting economic activity.

About 100 protesters marched through the mall shouting, “Liberate Hong Kong!” and “Return to the mainland!”

Some shoppers argued with police in olive fatigues and helmets who blocked walkways in the mall.

Police in civilian clothes with clubs tackled and handcuffed some protesters. One officer fired pepper spray at protesters and reporters.

“This protest is taking place in the north district near mainland China – targeting mainland Chinese traders,” Al Jazeera’s Florence Looi said while reporting from Hong Kong. “The whole idea is to cause disruption to mainland Chinese who practice parallel trading [in Hong Kong].”

Parallel trading, Looi added, had been a contentious issue for years – where mainland Chinese traders [mostly] buy goods in bulk items, and resell them in mainland China for high profits.

Hong Kong residents have criticised this practise which they say drives up the prices and causes shortage of items, including daily necessities in the semi-autonomous region, she added.

Protests that began in June over a proposed extradition law have spread to include demands for more democracy and other grievances.

The proposed law was withdrawn but protesters want the resignation of the territory’s leader, Carrie Lam, and other changes.

Protesters complain Beijing and Lam’s government are eroding the autonomy and Western-style civil liberties promised to Hong Kong when the former British colony returned to China in 1997.

On Saturday, some merchants in the Sheung Shui mall wrapped orange tape around kiosks or partially closed security doors in shops but most business went ahead normally.

Sheung Shui was the site of clashes between police and demonstrators in June.

Earlier this week, protesters smashed windows in shopping areas over the Christmas holiday. Some fought with police.

A total of 336 people, some as young as 12, were arrested from Monday to Thursday, according to police. That brought the total number of people arrested over six months of protests to nearly 7,000.