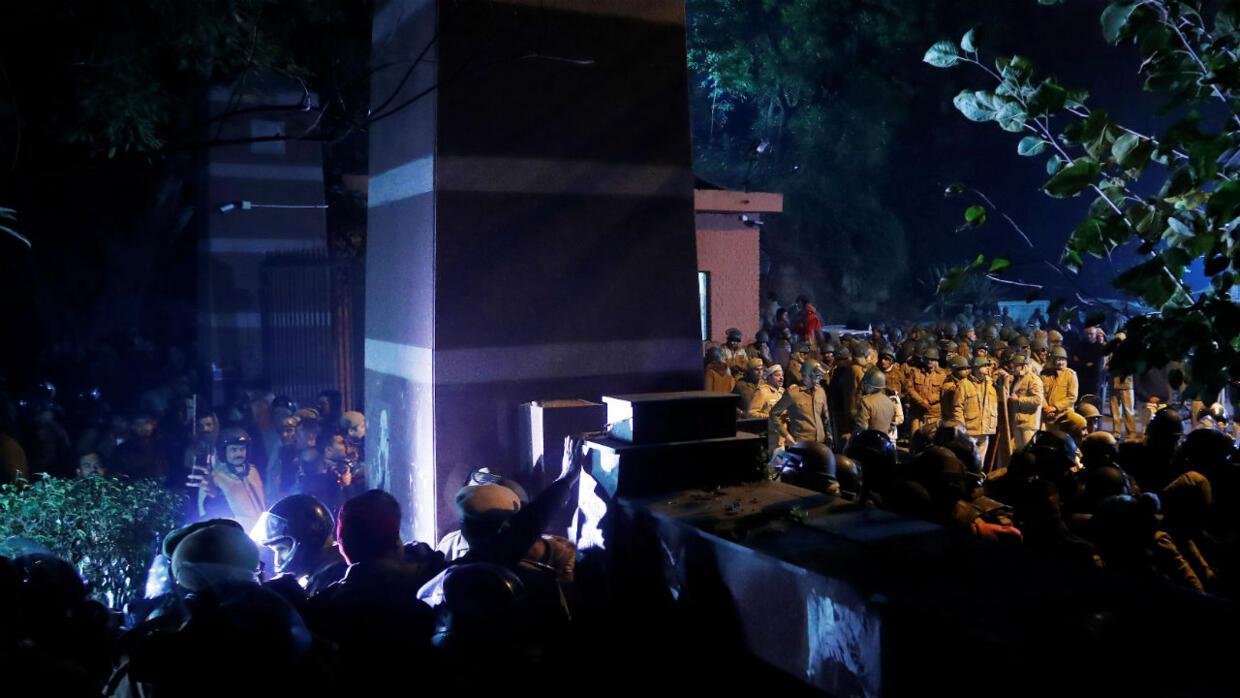 Masked assailants beat students and teachers with sticks on the campus of a prestigious university in India’s capital, injuring more than 20 people in an attack opposition lawmakers are trying to link to the government.

Videos that emerged after late Sunday’s assault showed people in masks roaming the corridors of Jawaharlal Nehru University (JNU) in the Indian capital, New Delhi, and beating students who were protesting against a fee hike.

Most of the injured were treated at a hospital for cuts and bruises, said Aarti Vij, a spokeswoman at the All India Institute of Medical Sciences.

Sahiba Mazid, who spoke to Reuters by telephone from inside one of the university hostels, said many men wearing masks and carrying batons had entered the hostel.

What we see in JNU tonight gives away a signal: now the fact that RSS’s oldest militia—ABVP—is put to work to attack oppositional voices, the “model” can get escalated. I’m afraid, the same strategy could be expected in other places too. I hope 2020s India won’t be 1920s Italy. pic.twitter.com/CsHl2eWtsw

JNU students on social media however blamed members of the Akhil Bharatiya Vidyarthi Parishad (ABVP), the youth wing of the Hindu nationalist Rashtriya Swayamsevak Sangh (RSS) – the ideological parent of India’s ruling Bharatiya Janata Party (BJP). It denied they had instigated clashes and said they were first attacked by the left-leaning students.

Opposition politicians also blamed the ABVP for the attack.

“The fascists in control of our nation, are afraid of the voices of our brave students. Today’s violence in JNU is a reflection of that fear”, tweeted Rahul Gandhi, a leading politician of the main opposition Congress party.

The brutal attack on JNU students & teachers by masked thugs, that has left many seriously injured, is shocking.

The fascists in control of our nation, are afraid of the voices of our brave students. Today’s violence in JNU is a reflection of that fear.

Akhil Bharatiya Vidyarthi Parishad, which includes students at JNU, released a statement saying they didn’t start Sunday’s violence and insisted their members were attacked first by students with links to communist groups.

JNU, one of India’s most prestigious universities, has a history of left-wing activism. Many there have also in recent years protested against Prime Minister Narendra Modi and the BJP, accusing them of curbing free speech.

The government was quick to condemn the violence.

“Horrifying images from JNU – the place I know & remember was one for fierce debates & opinions but never violence. I unequivocally condemn the events of today,” Finance Minister Nirmala Sitharaman, a member of the prime minister’s party, said on Twitter.

Horrifying images from JNU — the place I know & remember was one for fierce debates & opinions but never violence. I unequivocally condemn the events of today. This govt, regardless of what has been said the past few weeks, wants universities to be safe spaces for all students.

The BJP distanced itself from the ABVP and the JNU violence.

“This is a desperate attempt by forces of anarchy, who are determined to use students as cannon fodder, (to) create unrest to shore up their shrinking political footprint. Universities should remain places of learning and education,” the BJP said on Twitter.

Hours after the attack, students across the country took to the streets to protest the incident.

Hundreds of students and ordinary people of the city gathered outside police headquarters in New Delhi and accused police officers of inaction.

In Mumbai, students from several educational institutions gathered at the Gateway of India and demanded that the government act against the assailants.

Students at a university in Uttar Pradesh state held a candlelight march to protest the incident.

The violence comes amid simmering anger over the government’s new citizenship law, which has resulted in a series of violent protests and clashes around the country that have left at least two dozen people dead.

The incident is the latest in a series of violent clashes that have killed at least two dozen people amid protests over a controversial new citizenship law Modi’s government passed in December.

The law allows New Delhi to grant expedited citizenship to minorities from three neighbouring Islamic countries who entered India by December 31, 2014, but critics say it marginalises Muslims in the country as part of Modi’s larger Hindu nationalist agenda.

The citizenship law followed a promise, by Modi’s government, to extend a controversial national registration of citizens, implemented in northeastern India, across the country.

The moves sparked protests against what critics call the Modi’s governments bid to build a surveillance network that targets opposition supporters and Muslims.

Anti-government protests have turned deadly in BJP-ruled states, where the police have cracked down on demonstrators.

Many linked the Sunday clash to simmering tensions since the fee hike, while others criticised police and the university administration for failing to protect students from masked attackers on campus.

“How will the country progress if our students will not be safe inside (the university) campus?” he asked in a tweet.

Jaishankar took to Twitter to condemn the violence, saying, “This is completely against the tradition and culture of the university”.

The security presence was increased throughout the campus as India’s home minister, Amit Shah, called on Delhi police to investigate.

Elsewhere in the city, simmering tensions peaked outside Jamia Millia Islamia University, where hundreds of mostly young people have been protesting over the last few days against the citizenship law.