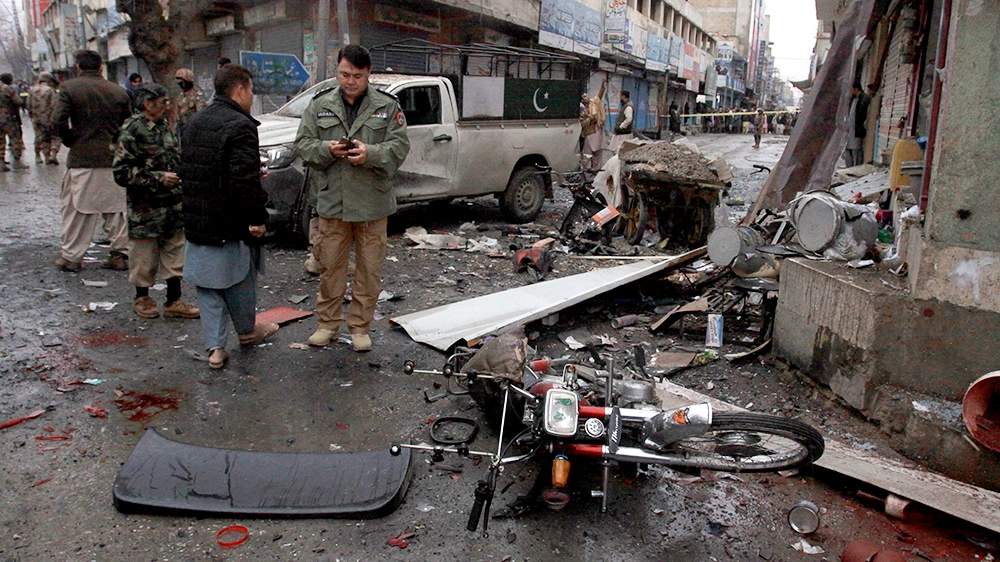 Islamabad, Pakistan – At least two people have been killed and several others wounded after a bomb targeted a security personnel vehicle in the southwestern Pakistani city of Quetta, officials say.

The attack took place at an intersection near the city’s busy Liaqat market on Tuesday evening, police said.

“Two people have been killed and the number of injured is 14,” said Waseem Baig, spokesman for the city’s main government hospital.

The explosives were packed on a motorcycle, although it was unclear if the attack involved a suicide attacker or if the bomb was planted to go off via remote control or a timer, said police official Mushtaq Hussain.

Quetta is the capital of Balochistan province, the country’s largest but most sparsely populated province, rich in mineral resources and the route of much of the $60bn China-Pakistan Economic Corridor (CPEC) project.

CPEC projects focus on transport, infrastructure and electrical power generation, culminating in a trade route that will connect southwestern China with the Arabian Sea through the length of Pakistan.

The route ends in a major commercial seaport in the Balochistan town of Gwadar.

For more than a decade, Pakistani security forces have been battling rebel separatist groups that want independence for the ethnic Baloch areas of the province.

Such groups frequently target Pakistani security forces across the province, although no group immediately claimed responsibility for Tuesday’s attack.

In November, at least two security personnel were killed and five others wounded in a similar attack targeting a vehicle, local media reported.

Images from the scene of Tuesday’s attack showed a moderately damaged Pakistani paramilitary vehicle, alongside debris strewn across the intersection.

Some shop fronts adjacent to the attack site were moderately damaged.