More than 30.8 million people around the world have been diagnosed with the novel coronavirus and almost 957,000 have died, according to Johns Hopkins University. More than 21 million people have recovered.

Here are the latest updates:

The Czech government could declare a state of emergency if a recent spike in coronavirus cases continues in the coming days, Health Minister Adam Vojtech said.

“Should we need to have some deeper measures [against the epidemic], then the emergency state will be necessary,” Vojtech said in a televised debate.

The government should debate this step on Monday, Vojtech said, added that he would not yet propose declaration of a state of emergency.

“We have not seen an escalation. The ‘R’ [reproduction] number is around 1.6. We will have to assess it based on weekdays when more tests are done,” he said.

The ‘R’ number measures how many people are likely to get infected by one person that carries the virus.

Prime Minister Boris Johnson said that from September 28 people in England will be legally obliged to self-isolate if they test positive or are told to by the National Health Service (NHS) tracing programme.

Belgium passed the 100,000 milestone of infections following a sharp increase in cases in recent weeks, according to figures from the research institute Sciensano.

The trend accelerated markedly in the first half of September, reaching an average of 1,000 new daily infections during the week of September 9 to 15, according to the data.

The Tunisian Health Ministry said 17 people had died from COVID-19, taking the country’s death toll to 155.

The virus infected 625 people over the past 24 hours, taking the total number to 9,736, while recoveries rose to 2,386, the ministry statement said in a statement.

In Bahrain, the health ministry said the nationwide death death toll rose to 221 after five people died from the virus, while 2,856 new infections were registered, taking the total count to 64,499. The country reported 57,299 recoveries.

British Health Minister Matt Hancock said a second national lockdown was one possible step to curb the spread of the coronavirus, but it was not what he wanted to happened.

“If everybody follows the rules then we can avoid further national lockdowns, but we, of course, have to be prepared to take action if that’s what’s necessary,” Hancock told the BBC.

The data added 105 new deaths, taking the total to 9,553, the biggest death toll in Southeast Asia.

South Korea extended level 2 social distancing for a week until September 27, which limits indoor gatherings to below 50 and outdoor to less than 100, and may tighten limits for the Chuseok holiday when people traditionally reunite with families.

Prime Minister Chung Sye-kyun said the level 2 restrictions need to be kept ahead of Chuseok as “cases with untraceable origins are steadily increasing and fewer tests being carried out on weekends means we should be on high alert”.

Social distancing policies for the September 30-October 2 holiday will be announced in the coming days.

South Korea reported 82 new cases as of midnight Saturday, the lowest daily infections since mid August, according to the Korea Centers for Disease Control and Prevention.

The Czech Republic’s daily count of new coronavirus cases dropped to 2,046 on Saturday, still a record number for a weekend day when fewer tests are done, data from the Health Ministry showed.

The overall count of confirmed cases rose to 48,306 in the country of 10.7 million people.

The Czechs have been reporting new cases of the infection at one of Europe’s fastest paces in recent weeks and the authorities have returned to some of the measures used in spring when the pandemic first reached the country.

Indonesia has suspended exports from an Indonesian seafood company PT Putri Indah into China after its frozen fish products tested positive for the coronavirus, the country’s fisheries ministry said in a statement.

The ministry said that an investigation was underway and that the suspension would only apply to PT Putri Indah “whereas the others can still do export activities as usual.”

The virus was detected on the outermost side of the package, not on the fish, the ministry said.

The seven-day suspension began on Friday, it said.

Hello, this is Farah Najjar taking over from my colleague Ted Regencia.

The World Health Organization has endorsed a protocol for testing African herbal medicines as potential treatments for the coronavirus and other epidemics.

WHO experts and colleagues from two other organisations “endorsed a protocol for phase III clinical trials of herbal medicine for Covid-19 as well as a charter and terms of reference for the establishment of a data and safety monitoring board for herbal medicine clinical trials,” a statement said, according to an AFP new agency report.

“Phase III clinical trials are pivotal in fully assessing the safety and efficacy of a new medical product,” it noted. 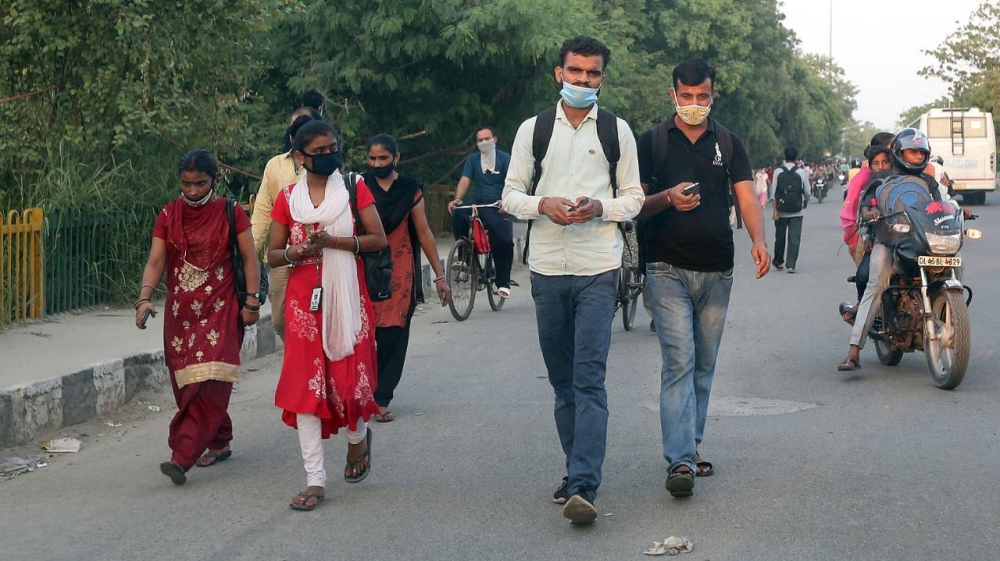 India’s federal health ministry reported 92,605 new infections in the last 24 hours, raising the total number of cases to 5.4 million – second only to the US.

The Italian health ministry reported another 1,638 new cases of coronavirus, bringing the number of cases to more 297,000.

The government also added 24 deaths with the total toll rising to 35,692 – the second highest in Europe next to the UK.

Greek authorities have announced 240 coronavirus cases, bringing the total number of cases to 14,978.

Australia looked set to record its lowest daily increase in new coronavirus cases in three months on Sunday as a hard lockdown in the city of Melbourne brought the country’s virus epicentre down sharply.

The second-most populous state Victoria, of which Melbourne is the capital, reported 14 new infections in the 24 hours to Sunday morning, down from 21 new cases the day prior and its lowest since June 19, according to Reuters news agency.

That put Victoria, which has spent months under lockdown to slow a second wave of infections, on track to meet a target of keeping average daily increases below 50 by September 28 when the authorities have said they may lift restrictions.

Brazil’s health ministry has recorded 33,057 additional confirmed cases of the novel coronavirus in the past 24 hours, bringing the total number of cases to more than 4.5 million.

Brazil also reported 739 additional deaths for a total death toll of more than 136,000 – the second highest in the world next only to the US.

All new cases were imported. At least 21 cases were also reported as “asymptomatic”.

No new deaths were reported keeping the death toll at 4,634. 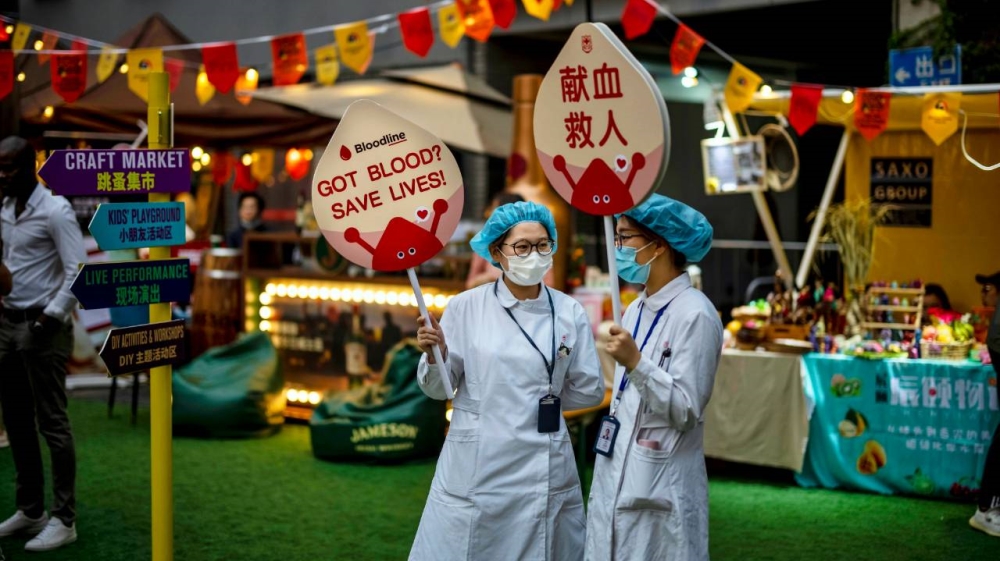 All new cases reported in China on Sunday were imported, although the origin of the other 21 asymptomatic cases was unclear [Alex Plavevski/EPA]

At least 455 new deaths were also reported pushing the death toll to 73,258. Earlier, the government has reported an estimated 120,000 “excess deaths”.

Of the new cases reported, at least 72 were local transmission. The country has a total of 22,975 infections with 383 deaths.

Brazil and Argentina have announced that they are joining a global alliance seeking to pool COVID-19 vaccines, after missing an earlier deadline.

Peru said it signed a deal giving the country access to 12 million doses of coronavirus vaccine through the COVID-19 Vaccines Global Access Facility (COVAX), a scheme for pooled purchase and distribution of future vaccines.

Argentina asked for more time to prepare the required paperwork, but it expects on Wednesday to sign its commitment to the vaccine mechanism led by the World Health Organization (WHO), a health ministry official told Reuters news agency.

The Brazilian government said in a statement late on Friday that it will sign up for COVAX after negotiations with Gavi, the Vaccine Alliance, which is the COVAX secretariat.

00:05 GMT – Italy to allow fans at football games from Sunday

Beginning on Sunday, Italian football arenas will open their doors to a limited number of spectators, as the country managed to avoid a resurgence in coronavirus cases.

Sports Minister Vincenzo Spadafora announced that up to a thousand supporters will be able to attend Serie A soccer matches nationwide, after the regional governments, the sports departments and football clubs reached an agreement.

French Economy Minister Bruno Le Maire has announced that he has contracted the coronavirus – this as the country’s number of infections is surging anew with nearly 13,500 new infections in 24 hours.

Le Maire said that he has so far not shown any symptoms but is under quarantine due to the disease. He is the fourth French minister to test positive of COVID-19.

For all the key developments from yesterday, September 19, go here.