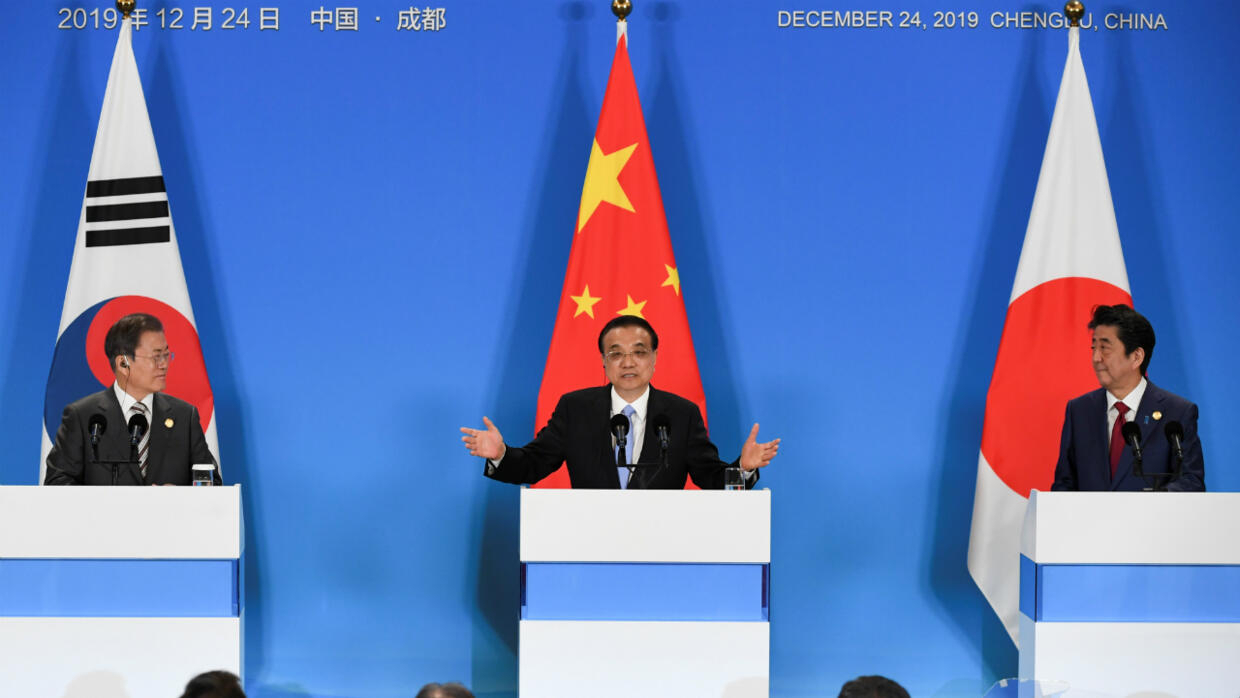 China hosted the leaders of squabbling neighbours South Korea and Japan for their first official meeting in over a year on Tuesday, flexing its diplomatic muscle with America’s two key Asian allies and seeking unity on how to deal with a belligerent North Korea.

The gathering in the southwestern city of Chengdu was held with the clock ticking on a threatened “Christmas gift” from North Korean leader Kim Jong-un that could reignite global tensions over the country’s nuclear programme.

Kim has promised the unidentified “gift” – which analysts and US officials believe could be a provocative missile test – if Washington does not make concessions in their nuclear talks by the end of the year.

US President Donald Trump said Tuesday that “we’ll find out what the surprise is and we’ll deal with it very successfully”, joking that “maybe it’s a present where he sends me a beautiful vase as opposed to a missile test”.

After the meeting with China, both Japan and South Korea urged the resumption of talks between Pyongyang and Washington – which have been largely deadlocked since a second summit between Trump and Kim in Hanoi collapsed at the start of this year.

The leaders of the three countries also promised to help promote dialogue to rid the Korean peninsula of nuclear weapons.

If the North fired an intercontinental ballistic missile in defiance of UN sanctions, it would contradict Trump’s argument that he had succeeded in reducing risks from North Korea.

Former US national security adviser John Bolton, who was dismissed in September, on Monday criticised Trump’s strategy and warned the North posed an immediate threat.

“The risk to US forces & our allies is imminent & more effective policy is required before NK has the technology to threaten the American homeland,” tweeted Bolton.

Ties between the two Asian leaders have hit rock bottom lately over trade issues and other disputes related to decades of bitter wrangling over Japan’s 1910-1945 occupation of the Korean peninsula.

The United States has urged the pair to bury the hatchet – worried their poor relations were complicating diplomacy in Asia – although it has held off on direct mediation.

China is appearing to fill that void with the Chengdu event.

“As the region’s major power, China hopes to show its diplomatic presence to the world by bringing the Japanese and South Korean leaders to the same table,” Haruko Satoh, professor and expert on Chinese politics at Osaka University, told AFP.

Before leaving for China, Abe told reporters that links with Seoul remained “severe”.

But Abe and Moon were photographed smiling and shaking hands, and made positive overtures at the start of their bilateral meeting.

The relationship between Japan and both Koreas is overshadowed by the 35 years of brutal colonisation by the Japanese – including the use of sex slaves and forced labour – that is still bitterly resented today.

These infuriated Tokyo, who insisted the matter had been settled by a 1965 treaty between the two countries.

Seoul then threatened to withdraw from a key military intelligence-sharing pact, although it reversed course in November and agreed to extend it “conditionally”.

Abe said he hoped “to improve the important Japan-South Korea relations and to exchange candid opinions”, according to Japanese public broadcaster NHK.

But at a press conference after the bilateral, Abe said it was “South Korea’s responsibility” to resolve the issues.

“I urge the South Korean side to get the ball rolling to regain the soundness of Japan-South Korea relations,” he said.